10K and Half Marathon
Racing Tactics and Strategies
By Roy Stevenson 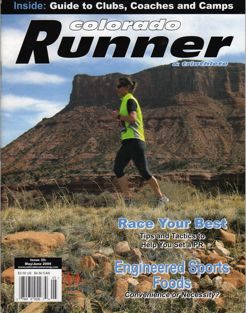 You're waiting behind the start line, twitching your legs nervously, just wanting to get going. Bang! The gun goes off. A whole universe of possibilities waits for you at the finish. Will you cross the line elated that you've run your best time and wrung everything out of yourself? Or will it be another one of those races where you grimly hang on to the bitter end, lunging across the finish line, exhausted, wondering why your time was much slower than your best?

I suspect most semi-serious and recreational runners experience the second scenario because they just line up, trot off when the gun goes, wait for the race to unfold, and then run their race without a plan. This is a recipe for mediocre performances, and often leads to disaster.

Let's look at the three standard racing tactics and strategies used by semi-serious runners and middle of packers.

1. Positive splits. Race out as fast as you can and hang on as long as you can. This tactic is definitely not recommended. Read on to find out why this should be avoided.

2. Negative splits. Start slowly, gradually speed up then come through with a roar in the last mile or two.

3. Even-Paced Racing. Run at a steady, even pace the entire distance, so your two halves of the race are nearly identical. This has some great advantages and is how most runners get their best times, and world records are set. Perhaps a better way to explain it is "even effort", meaning that your effort is distributed evenly along the course. Hence when you come to hills, you will still slow down, but your effort is maintained.

What does exercise science show about 10K and half marathon racing strategies?

Another study examined heart rate response to these pacing patterns during a one mile run. It found the slow-fast pattern required less energy than the other race patterns. Another study over one mile found that when pace varied, significantly higher oxygen debt was incurred, and steady pace was the most efficient means of using energy reserves.

Although these studies were done over relatively short distances, common sense tells us that the longer the race, the more the effects of a rash early pace will be felt later on.

A slow early pace conserves greater stores of glycogen, whereas fast early pace depletes glycogen supplies at a horrendous rate-a critical concern in any race over 5K. The rapid glycogen burn results in a large increase in lactic acid-translating into a much slower pace.

Jeff Galloway, in his book Galloway's Book on Running, claims that for every second you run too fast in the first 3 miles, you'll run as much as 10 seconds slower per mile at the end in a 10K. Presumably, in an extended event like the half marathon, the slow down will be more dramatic than this.

Thus, a moderate early (even) pace or negative split race minimizes the threat of glycogen depletion and reduces your chances of premature exhaustion-your energy is economically burnt during the entire race. Laminate a pacing chart and hang it under your race numbers where you can refer to it easily.

Seattle runner Ann Armstrong agrees with the even pace strategy. "My standard race tactic (regardless of distance) is not to go out too fast especially if you don't know the course or your competition. Invariably going out hard in the first half doesn't give you the result you want".

10K and Half Marathon Racing Tip:
Base Your Race Plan on Your Desired Race Pace

Numerous factors come into play when planning your 10K or half marathon racing strategy. It's all about setting the right pace to get you to the finish in your fastest time with little energy left. Your pace must be set according to your fitness, the topography of the course, and ambient weather conditions.

An example or two best illustrates the interplay between these factors. If it's a hilly 10K course, 80 degrees, 80% humidity, with a 5 mile an hour headwind, and you are not particularly well conditioned, clearly you would need to set a conservative pace only a notch above your standard training pace for this distance. Washington marathoner Cliff Richard says, "hills can figure considerably into tactics. If there's a big uphill late in the race, I know I need to save energy for that".

On the other hand, if you've just finished a 3-month conditioning phase, the course is flat, with a near perfect temperature of 50 degrees and low humidity; your pace should be near maximal. Regardless of the weather conditions, your early pace must be slower than your desired race pace, at least for the first mile.

Seattle's elite German marathon import, Uli Steidl, plans every race beforehand, and generally "I try to run at even pace. But race tactics for any particular depends on many factors, including but not limited to my current shape, other runners present, weather, race goal, course profile, etc".

10K and Half Marathon Racing Tip:
The Impact of Heat and Humidity

According to research, runners start to slow down past 55 degrees, and start suffering at 65 degrees. When humidity is thrown into this mix, the slow down is even more dramatic. Going out too fast in extreme heat and/or humidity can even cause heat injury.

How many of us are guilty of flying off at a suicidal pace in the first mile or two of a 10K because we were so excited? As Ann Armstrong says, "The longer the distance the more energy conservation and muscle recovery come in to play. Spend it early and you will be miserable in the end".

With competition our adrenal glands dump large amounts of stress hormones like adrenalin into our bloodstream, causing us to start far too quickly. So hold yourself back and start very slowly-up to 30 seconds slower than your desired race pace. Don't worry about losing time this way-you'll make it up when it counts later in the race.

Ann Armstrong doesn't intentionally go out fast, but often it happens. She says, "Getting ahead of your splits early in a race is generally not money in the bank. My best races have been when I hold back in the first half (sometimes to the extent of near tedium) and then pick up in the second half".

Start with runners of your ability, not faster. If it's a large race, avoid weaving in and out of the runners. Settle into your desired goal pace somewhere around the first mile. Keep things under control until you're past the first 2 miles in the 10K and 5 miles in the half marathon.

Armstrong advises beginning runners "Don't get too excited and go out too fast. Don't get caught up in whatever pace others are keeping. Take it easy in the beginning and you will enjoy the finish a lot more and surprisingly you'll probably be faster".

Half Marathon Racing Tips for the Middle of the Race

Approaching the middle of the race you should still be running within your capabilities. Now gradually start picking up your tempo. Do not pick your pace up in a short fast burst-it should be done over a half-mile or more. Speed up almost imperceptibly.

Most of the time you should attempt to stay with your pacing plan, but occasionally the weather or how you are feeling will merit altering your pace. Do so without regret.

Evidence strongly supports the tactic of drafting behind other runners. Research shows the energy required to overcome air resistance increases exponentially with running velocity and headwind. One study found that running into a 10 mph headwind adds 8% to energy costs. But by drafting behind another runner you reduce wind resistance by 90%, and decrease your energy expenditure by 7%, so it's almost like you're running without a headwind.

Shelter about one meter behind other runners into a headwind. Conversely, when the wind is behind you, come out wide from the pack, set your sails, and pick up your pace.

Running with a group can help tremendously in 10k or half marathon racing. Sharing the goal and motivating each other reduces your perceived effort. Just make sure the pack is running at your pace.

Accurate courses are measured over the shortest possible route open to the runners. So make sure you cut the corners-this is not cheating. Running down the center of the road adds 1-2 seconds to your finish time and extends the distance you run.

Half Marathon Racing Tips for the Last Third of the Race

No matter how well you pace yourself, you'll be feeling discomfort by this stage. Concentrate on relaxing and holding your form. Focus on maintaining your pace, breathing, temperature, and rhythm, and adjust pace up or down as you feel. Uli Steidl advises runners in a 10K, "If you still feel good at Mile 4, THEN pick it up".

Towards the end of 10K or half marathon racing, runners tend to slump forward, causing their stride to shorten, slowing their pace. A good core-strengthening program eliminates this slump. Greg Crowther, elite ultra marathoner maintains motivation in this way; "In the second half of the race I tend to focus on trying to catch the people in front of me, which seems to motivate me more effectively than the splits themselves at that point".

Racing Tips for Your Final Sprint

The practice of sprinting the final few hundred meters should be used with caution, if at all. You've just thrashed yourself over 10K or 13.1 miles, and your body is screaming out to stop. Perhaps getting your heart rate up to maximum, accumulating excess lactate, and the other stressors that zap your tired body here might not be worth those few seconds you've shaved off your time.

These then, are the basic strategies used in most 10K and half-marathon racing. It's clear what the most effective tactics are, based on research and much personal experience. Maybe it's time for you to evaluate your personal racing tactics and try something new?

Related articles on this site that will interest you:

Build a Strong Base

Free Radicals and Antioxidants: What They Mean for Distance Runners﻿