Free Radicals and Antioxidants
for Distance Runners
By Roy Stevenson 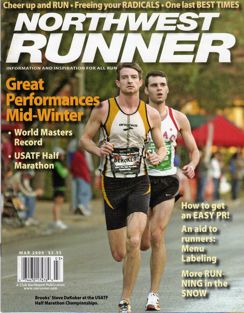 We all know endurance activities have many health benefits from weight control and stress reduction, to reducing cholesterol. These are, I'm sure, some of the reasons that motivate us to get out there to run on the roads and trails, day in and day out.

Ironically, there's also a down side to strenuous aerobic activity. The huge amounts of oxygen we process while running cause increased oxidative stress to our body's cells. This process, called oxidation damages the muscle cell's membrane, internal structure and organelles impairing their function. The result: muscle soreness and inflammation, fatigue, and premature aging of the cells-all done by some nasty little molecules called free radicals.

These mean-spirited free radicals work like this: during respiration cells take electrons from the sugars they burn, and add them to oxygen to generate energy in a process called the citric acid cycle. Stray electrons generated during these reactions collide with other molecules, causing them to lose an electron from their outer shell, destroying the chemical bonds between molecules. Thus free radicals are born.

Seeking stability, free radicals seek other cells with intact electron pairings in their outer shells, in an attempt to steal an electron from them to reach balance. This chain reaction happens thousands of times each minute in our body.

In addition, rapidly rising levels of catecholamines (stress hormones that are released during endurance exercise) further contribute to free radical production. As if all this isn't bad enough, heat generated during running, sunlight, stress, exhaust fumes and other pollutants generate free radicals in our body. Researchers even believe muscle soreness caused by downhill running is a manifestation of free radical mayhem.

Antioxidants to the Rescue

All this free radical damage might seem harmful enough to make you give up running. However, all is not lost - enter antioxidants, whose job is to neutralize free radicals produced from running.

Watch what happens when you leave a slice of apple exposed to air for a while-the surface becomes darker due to oxidation. However, when you pour lemon or orange juice over the slice it doesn't darken. Vitamin C, a strong antioxidant in the juice, buffers the production of free radicals on the apple's surface. And this is essentially what happens with antioxidants inside your body.

As free radicals are produced, antioxidants reduce the damage caused by free radicals by checking their rapid spread and removing them from circulation before they can do harm. They are essentially a clean up crew of scavengers, sweeping free radicals away and blocking their formation.

All is well with our body as long as antioxidants outnumber free radicals. However, if we don't consume enough antioxidants in our diet, the free radicals run rampant and do their damage. And because we metabolize large amounts of oxygen while running, and antioxidant levels tend to quickly run low in our body, free radical damage is commonplace in runners. Research shows that hard training endurance athletes often have low levels of antioxidants circulating in their bodies.

Research on Antioxidants and Exercise

Evidence exists that antioxidants reduce free radical damage in runners. While studies have not been overwhelming enough to coax all sports nutritionists and exercise scientists off the fence to recommend antioxidant-rich foods and supplements for their charges, the research has certainly raised a few eyebrows.

Many studies look promising enough to support the practice of eating antioxidants rich foods in our diet if for no other reason than these foods are extremely beneficial to our health, and eating large amounts of them can do no harm.

The issue of antioxidants versus free radicals is thus one of the hottest in current sports nutrition research. It has a lot of us excited about its practical implications for endurance athletes like runners, triathletes, cyclists, swimmers, rowers and cross-country skiers.

But it leaves us with three important questions:

1. Should athletes take antioxidant supplements as "insurance" against free radical damage?
2. What foods are rich in antioxidants?
3. How much of these foodstuffs should we be eating?

Nutritionists prefer you get antioxidants from whole food sources instead of supplements, for good reason. Whole foods have a large number of antioxidants, plus other vitamins, minerals and fiber-and they're a lot cheaper than supplements.

That said, it should be noted that many nutritionists and coaches are already recommending antioxidant supplements for heavy training endurance athletes. Kyle Heffner, MS, in his chapter, "Fortifying and Supplementing Your Energy Needs', in Run Strong says, "There is growing evidence for the addition of antioxidants, or foods rich in antioxidants, to the diet. . . . Solid evidence supports the contribution of the following supplements to general well being: vitamins C, E, and A; bioflavonoids. ."

Furthermore, antioxidant requirements to combat free radical levels in hard training athletes may be many times higher than can be supplied in food, so a supplement may be necessary. For example, vitamin C (a strong antioxidant) intake of a hard training runner is likely to be many times the vitamin C requirements of a non-runner. With the vitamin C content of one orange being about 75 milligrams, an athlete may need up to 2000 milligrams or 26 oranges to compensate for free radical activity.

Where to find Antioxidants in Foods

Most are found in fruits and vegetables. Nutritionists suggest a combination of fruit and vegetables have a synergistic effect on antioxidants, possibly causing a reduction in cancer, heart disease and a long list of other maladies.

No consumer guidelines exist for antioxidant intake, so beware of consuming large amounts of vitamin E in supplement form-it's not water-soluble and can build up to toxic levels in our cells.

Table of Common Sources of Antioxidant Vitamin and Minerals

There's more good news on the antioxidant front: fruits and vegetables contain thousands of organic chemicals called phytochemicals, many of which act like antioxidants. Phytochemicals function to protect plants against disease and environmental hazards such as ultra violet radiation, etc. They're even more powerful than the antioxidant vitamins and minerals A, C, E and Selenium.

Research shows these plant protectors increase quality of life by preventing certain diseases and may possibly lengthen lifespan, although no conclusive evidence exists yet to show this.

The phytochemical family is huge-you may have heard about some of them recently-Carotenoids, Flavonoids, Isothiocyanates, Phenols, Sulfides, and many others. To give you some idea their numbers, 4,000 flavonoids alone have been discovered.

Athletes certainly have nothing to lose by increasing their intake of these wonder foods. Making sure you are eating enough of these antioxidants and phytochemicals may be the path to ensuring you recover from your training efforts efficiently, and perhaps staving off disease.

Return from Antioxidants to Home Page