The Picasso of Bonsai
By Roy Stevenson 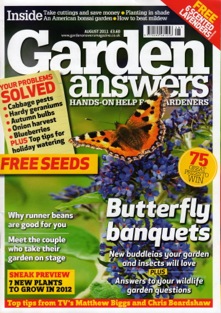 Five miles west of Kitsap Peninsula’s quiet, historic little marina town of Port Orchard, alongside Highway 16, lies a 7-acre Bonsai Garden paradise that offers a Tolkien-like landscape where you might expect hobbits, fairies and goblins to spring from behind miniature trees, bushes, and sculptures at any second.

Daniel Robinson first presented a large Ponderosa Pine at a Bonsai convention in New York City in 1979. It differed so radically from the small, traditional, staid sculpting of the time that Frank Okimura, the curator of the famous Brooklyn Botanical Gardens called Daniel, “The Picasso of Bonsai”. The name has stuck since, and rightly so.

What then, is so different about Daniel Robinson’s bonsai presentations? For starters, his designs pay little heed to the traditional aesthetics of Japanese tree sculpting. Robinson’s trees can be huge, as evidenced by his large sweeping Ponderosa Pine at the New York Bonsai convention. He especially has a love and respect for the driftwood-like appearance of aged and ancient trees, with twisting and turning deadwood sections that project the tree’s majesty and profound age.

Robinson wants his trees to show the centuries of struggle they’ve had to survive, which is why he garners most of his plants from the forest. He looks for ancient trees with only a few surviving weathered, gnarled and bleached limbs, broken off in places, but clearly enduring.

Wearing his trademark checked flannel shirt and blue jeans, long swept-back grey hair, turning to white, tied in a ponytail, and a lined, sunstained face, Daniel is a delight to meet. After spending a few minutes with him, he’s easily described as vibrant, engaging and passionate about his work, and has a story about every one of “his trees”.

“My first recollection as a tree or plant guy occurred while living at my paternal grandparents house in Seattle in 1946. I was seven years old. My grandfather was an avid gardener and I used to help him as he pruned, groomed and cared for his residential property in West Seattle”, explains Daniel about his start in horticulture. His love and curiosity about trees permeated his soul during his teenage years—every school science project involved tree, bark, twig, or leaf identification.

While studying forestry at the University of Washington in Seattle, Daniel worked part time for a nursery. “The firm did a lot of landscaping, using native plant material. I evolved into a collector of native trees and other plants from the local mountains. Unusual or gnarly trees yielded more revenue to me so I sought them out. Vine maples (an American equivalent of Japanese Maples) were a favorite in the native plant landscaping arena. I collected enough to pay my way through school”, he tells me.

But Daniel’s Bonsai epiphany came as he was collecting maples in the foothills of the Olympic Mountains when he came across a well-used deer and elk trail. “All along the edge of the trail were stunted, deer-browsed vine maples. Stunted and unbelievably twiggy, these little gems were very old, with hollow gnarly trunks. Somehow from an early experience in my life I knew that this was what the Japanese put in those pots. And so it began. Collecting trees for landscaping and finding little stunted ones for bonsai became an obsession”.

Having traveled and taught all over the world, by 1990, Daniel realized that it was obvious that his life had become consumed with Bonsai. After retiring from the Bremerton Fire Service in 1991, “Suddenly I had time. I fulfilled a long held dream of creating a garden where I could inject my huge collection into an array of natural settings. Succinctly put, "I wanted to create a forum for 'em".

My wife (Diane) and I looked at several sites, and we settled on an old landfill site, dating from the 1930’s and 1940’s. It was close to home, it was 7 acres with 1500 feet of waterfront and a clearly empty palette for me to create the outdoor museum we named "Elandan Gardens".

A grueling 2-year permitting process was required to gain access to the site, involving 26 different government agencies, and permission was granted in 1993. Then the real work began. As they cleared the site a whole world of recent history kept turning up; bottles, jars, treasures.

Dan describes the materials used for the gardens; “We collected gi-normous stones from logged areas; some were 20 tons. Large trees, specimen rhodys, azaleas, huge old cedar stumps, logs and root chunks, all were critical ingredients. This creation was a family affair, Diane, and our children Shanna and William literally took two years out of their lives to help me create this unique destination garden.”

We created a lake with waterfalls, a "teacup" style with pathways around the edge of the lake”, Dan describes the garden building process. One day, while watching Dan standing on the huge piece of undeveloped land, leaning on a shovel, she said to herself, “He's either nuts or he has great élan”, which is how the name Elandan (Elan + Dan) was penned.

Opening in the winter of 1994, Elandan Gardens attracts 3,000-5,000 visitors each year, from all over the world and every nationality, including artists and collectors. Daniel has had European bonsai master Walter Pall (also an appreciator of the “natural” style) visit, and many American bonsai artists including Nick Lenz, have worked with Dan on a number of trees in the Garden.

Bonsai trees are very labour intensive, and every year a small cadre of Dan’s friends and enthusiasts help Dan and Diane re-pot, prune, and water the trees. Dan’s sculpting techniques involve the clip-and-grow style that is widely practiced, and wire training. To encourage some of the larger branches to droop lower Dan suspends weights to the branches.

He’s also reknown for clipping his branches to mimic the old gnarled shape of ancient trees, and keeps the foliage sparse, rather than luxuriant, to make them look older. He tends to avoid the popular triangle shapes, preferring the aged tree look of multiple tops, with some that are barren, like driftwood, and aims for a more natural look.

Diane Robinson runs the adjacent Elandan Gardens Gallery crammed with Asian antiques, exotic plants, and fine furnishings. Daniel and Diane welcome visitors from the United Kingdom, and invite them to come and experience these one-of-a-kind gnarly bonsais and gardens. A personal tour with Dan will make your visit more memorable, so contact him before you leave the U.K. or after arriving in Seattle, to arrange a tour. Allow at least two hours to view and appreciate the gardens.

Getting to Elandan Gardens from Seattle involves a relaxing one-hour scenic ferry ride from downtown Seattle on a Washington State Ferry, or a drive across a historic suspension bridge. For complete travel details, visit the Elandan Garden website at www.ElandanGardens.com

For lodging and other information about the region, go to www.Visitkitsap.com.

Visit any season. The Pacific Northwest climate is similar to much of the U.K.’s weather—moderate temperatures with rain possible at any time.

Return from Bonsai at Elandan Gardens to Northwest Travel

Return from Bonsai at Elandan Gardens to Home Page