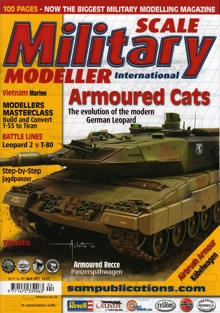 The Parola Tank Museum in Hameenlinna, 100 kilometres northeast of Helsinki, has a reputation as a tank enthusiast’s dream, boasting over 50 tanks and armoured vehicles. I’m going to see if it is a tanker’s nirvana. Can it be mentioned in the same breath as the holy grail of tank museums, Bovington?

The bus stops beside a deserted field out in the middle of nowhere and I walk down a steep driveway wondering if I‘ve found the right place. I see a dense billowing cloud of smoke and hear the clatter and screech of metal treads from the bottom of the hill. I’ve found the tank museum and my timing is impeccable!

The indoor tank museum was opened in 1961 and about two dozen tanks are crammed into its medium sized rooms. The front and turret armour of a Finnish (formerly Soviet) T-54 is cut away for training purposes, revealing its machinery. Soviet BA-10 and BA-20M Armoured Cars stand next to each other—booty captured from the Soviets that were used by the Finns for patrols during the Winter War and eventually used by the Army and Police forces until 1959.

Outside, dozens of tanks are lined up on three long green grass embankments, facing across to the museum buildings as if about to fire a salvo. Propped up on large concrete blocks the tanks represent an impressive collection—armour from Russia, France, Britain, U.S.A., Finland, Sweden, and Germany, plus the odd NATO discard.

The Soviet tank collection is especially impressive: T-26, T-28, KV-1E, T-34, T-34/85, T-50, T-60, T-70, ISU-152, and sometimes more than one model of each. Most were captured from the Soviets during the Winter War or during the Second World War and used against their former owners. The Soviet ISU-152, for example, was one of two captured in Portinhoikka in June 1944. Other tanks captured by the Finns and used against their former owners include a Soviet KV-1, KV-1E, (both captured in 1942), a T-35/85 (captured in 1944), and a Soviet T-26C (captured during the Winter War). Some of these tanks still bear nasty gouges from direct hits on their front armour, front plate and turret.

The German Panzerkampfwagen IV Ausf. J has an interesting history. During the summer of 1944 Finland bought 15 of these tanks, and was supposed to have purchased more. However, Finland’s reversal of allies by suddenly declaring war against Germany led to the Lapland War against them. Naturally the Germans ended further deliveries. Ironically, the 15 Panzerkampfwagen IVs were used against their German suppliers.

The two German Sturmgeschutz 40 Ausf. G were bought by Finland in 1943. They took part in the decisive battles in the Karelian Isthmus in 1944, destroying several enemy tanks during the summer battles. The sand-coloured Stu III is restored to its original colour scheme and markings.

At the top of the hill, the Finnish Armoured Train, stretches for 100 metres between two rows of tall thin pine trees. This awesome sight is the museum’s centerpiece—I’ve been to a tank museum or three, and this is one of the most impressive displays I’ve seen. Modified after being captured from the Russians in 1918, it served as a mobile artillery platform during the Winter War. It’s a fearsome sight, with gun carriages protected by thick steel plates and muzzles protruding from gun ports. Lethal looking turrets bristle with cannon and machine guns atop the cars. The camouflage completes the authentic effect.

The Parola tank museum is superb, all the more appealing because of its park-like setting with trees spread around the grounds. The museum’s mission is “to gather and exhibit the history of the Finnish armoured and anti-tank defence forces and illustrate the development of armoured fighting vehicles from 1917 on”. I’d say it delivers, and then some. Return from Parola Tank Museum to Military History