The Seattle Museum of the Mysteries
By Roy Stevenson 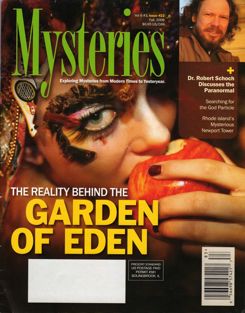 Tucked away in a basement in Seattle’s Capitol Hill lurks the Seattle Museum of the Mysteries, a non-profit museum and research Center dedicated to furthering education, research, and history of paranormal science and ancient civilizations. The museum also explores alternate explanations of reality, such as UFOs, crop circles, Bigfoot lore, and local mysteries.

Special exhibits, photographs, artifacts, books, documents, and weird inventions line the shelves and walls of the museum. A wax head reconstructed from FBI descriptions of D.B. Cooper, the hijacker who bailed out of a commercial airliner over southwest Washington with a $200,000 ransom on November 24, 1971, never to be seen again, sits in a place of honor on a shelf, as do four sets of plaster casts of Sasquatch footprints.

One set was found near Walla Walla, Washington. The other three are copies of the casts of the Bluff Creek, California, Sasquatch taken by Roger Patterson of the famous Petterson-Gimlin Sasquatch film. Bob Titmus made the copies of the casts. The Sasquatch exhibits are amongst the most comprehensive in the country, with footprint casts, skull comparison charts, hand and knuckle casts, hair samples, and artwork.

Pacific Northwest anomalies that never quite made the national press also grab a guest’s attention at the Seattle Museum of the Mysteries. One of them is Mels’ Hole, near Manastash Ridge in Ellensburg, WA, which some say is the deepest volcanic vent hole in the world. Another is the ghost town of Wellington that was abandoned after a catastrophic train crash on the Iron Goat Trail near Steven’s Pass.

One of the worst train wrecks in U.S. history, it killed 96 people in 1910. Some say ghosts still haunt the ruins of the abandoned town. Another display tells about Dr. Linda Hazzard, the northwest’s first serial killer who lured at least 40 unsuspecting women to her health farm between 1910 and 1938 and proceeded to starve them to death. She was nicknamed “the tomato soup killer” because she fed her victims a tomato-water broth to weaken them. When they were sufficiently ill and under her power she would get them to sign over their possessions to her. Convicted of manslaughter she was released on a technicality and went to Australia. Later she returned to the U.S.A. residing in Olalla, Washington.

The museum also hosts weekly presentations by authors, explorers, researchers, investigators, and experts. The topics range from Ghosts of Christmas Past, (a presentation by the Auburn Paranormal Activities Research Team), to a presentation about D.B. Cooper’s disappearing act—by an FBI Agent. Sadly, this was mysteriously cancelled. The FBI agent first confirmed, and then later declined saying his FBI supervisor had “declined” his presentation.

For paranormal aficionados, the Seattle Museum of the Mysteries is a quiet, friendly haven where one can escape a skeptical public and surround oneself with others who share a similar fascination with the world’s mysteries.

On June 21, 1947, Harold Dahl, his son, and two crewmen were salvaging logs south of Maury Island in the Puget Sound when they saw six doughnut-shaped disks hovering over the bay. One appeared to be in trouble and the wobbling disk dropped some sort of shiny metal on the beach and into the water, which created steam when it hit the water. The falling slag also wounded Dahl’s son and killed their dog.

A B-25 bomber then crashed near Kelso, WA, soon after take-off from McChord Field south of Tacoma, Washington, carrying rock samples and pieces of the UFO from Maury Island. A mysterious informant claims a 20mm cannon shot down the bomber just after take-off to destroy the rock samples. Was the bomber shot down by an unknown government agency to prevent analysis of the rock samples? We can speculate that it could have been air force personnel, or someone else who had reason for preventing this sample from being made public. Or did it crash from simple engine failure? No one knows for sure. Three days later, Kenneth Arnold saw nine disks flying across the north face of Mt. Rainier, ushering in the modern-day UFO era.

At the museum, visitors can listen to a tape recording of an interview with Arnold. Newspaper and FBI reports of his sighting, the Maury Island incident, and the B-25 crash make fascinating browsing.

Return from Seattle Museum of the Mysteries to Northwest Travel

Return from Seattle Museum of the Mysteries to Home Page