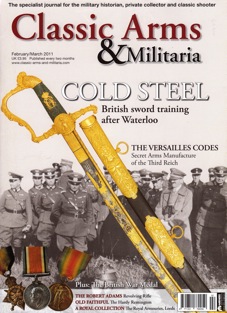 The Royal Armouries Museum in Leeds, West Yorkshire, may well be the world’s finest repository of antique weapons and armour. I’ve visited over 250 military museums and have yet to see or hear of one that rivals the quality and presentation of this remarkable collection of military arms and accoutrements. Located in a towering, modern grey brick and concrete building on Armouries Drive in downtown Leeds, a stone’s throw from the River Aire, the Royal Armouries Museum boasts a staggering array of weapons.

Where to start your visit in the Leeds Royal Armouries Museum? After all, you’ve got over 8,500 objects in five galleries to check out. A great place to get warmed up for your onslaught is the Hall of Steel. This elegant steel and glass tower has 2,500 weapons and armour pieces neatly arranged in geometrical lines and rows ascending all the way from the bottom to the top of its five storeys. Crossed muskets, vertical rows of pikes, lances, halberds, and sets of gleaming 17th century armour breastplates are symmetrically arranged up the tower’s walls, to great effect.

The excellent selection of brass cannon and mortars found at the base of the Hall of Steel dates from the 19th century, with a few older pieces sprinkled amongst them. It’s obvious that the rows of cannon attached vertically to the wall and the half dozen mortars standing on ledges along the wall, are selected for their immaculate condition, clearly discernible proving marks, engravings and heraldic coats of arms. You’ll want to spend a few minutes looking at these beauties and their ornate inscriptions.

The Royal Armouries museum docents are excited about the return of Henry VIII’s world-famous armours to Leeds, so the Tournament Gallery is where I go first. The Tournament Gallery focuses on Henry VIII and his obsession with military displays of skill. King Henry, at 29, was 6ft 1inches tall and a fine athlete, excelleding at tennis, wrestling, archery, jousting and foot combat. He took part in many combats in specially made suits of armour. Henry’s skirted Tonlet suit of armour, designed for foot combat is a magnificent battledress made in short order by his European armourerers. This shiny steel suit, made from several existing pieces of armour with additional pieces forged to match, saw much action. Its main feature is the hooped skirt, or tonlet, and a great basinet helmet. King Henry recruited his armour experts from Europe’s traditional armour-making centres to work at his palace at Greenwich, from 1511 onwards. Henry’s

The Tournament Gallery’s (and perhaps the entire museum’s) iconic centerpiece is Henry VIII’s almost unbelievable Horned Helmet. This bizarre headpiece was a gift from the Holy Roman Emperor Maximilian I, and made by Konrad Seusenhofer, the master craftsman for the Emperor’s imperial armour workshop at Innsbruck. The Royal Armoury’s academic director, Graeme Rimser, describes the helmet as “perhaps the most controversial piece of armour in England. The helmet has a visor in the form of a grotesque human face, with ram’s horns”. Its etched facial decorations bring it to life; stubble on the chin, crow’s feet around the eyes, and rounded brass spectacles that look like they’ve been snatched from a Victorian time warp. Henry most likely wore this peculiar horned helmet at court pageants, rather than in combat.

Continuing around the Tournament Gallery, informative signs answer every question about tournaments that I had ever pondered, and far more about jousting, foot combat and the tilt, than I will ever be able to remember. Fought between teams as mock battles over large areas of countryside, tourneys were in effect, early military manoeuvres. In the early years, tourneys had small fenced refuges for the contestants to draw their breath. Later, tournaments were transferred to lists, or smaller sanded arenas; those at the royal meeting of Henry VIII and Francis I at the Field of Cloth of Gold tourney measuring 900 feet x 320 feet.

Swordsmen in tourneys fought with blunted lances and swords, wearing full battle armour. A helpful guide tells me that back in the day, a suit of armour weighed from 75-85 lbs, and reinforced tournament armour up to 120 lbs. There were strong men indeed. Originally, blacksmiths tailor made the armour, generally for the nobility or their knights-in-arms. A good suit of armour was regarded as the ultimate status symbol in the 14th, 15th, and 16th centuries. Later with the discovery of steel, armour making became a full-fledged profession.

Regardless of the tournament’s safety measures (such as they were) and armour, there was significant loss of life and injury at these affairs. Perhaps the fact that victorious knights could seize the horse and armour of those they defeated, enabling many soldiers to make a good living from tourneys, caused some of the overzealousness. One wonders if Henry’s opponents held back lest they injure the King, but by all accounts he was an excellent warrior, whether on foot or when tilting his lance at another horse borne opponent.

The most extravagant tournament ever held, a colourful and lavish two-week binge known as the Field of Cloth of Gold, was thus named because the King’s and their retinue’s tents were made of gold cloth. Held in 1520, and hosted jointly by King Henry VIII and Francois I, the newly appointed King of France, the tournament took months of planning, and ended happily with the signing of a peace treaty between the two powers. Aye, Henry was quite a lad, and knew how to put on a good show!

The gallery boasts several beautifully crafted, small suits of armour, as if for dwarfs, arranged in a large glass case. I’m surprised to learn that youngsters often started combat practice as early as 8 years old. These suits weighed up to 50 lbs, and apparently the children grew stronger and adapted to the weight quite nicely. Another eye-catching headpiece is the Moustache Masked Helmet, worn at parades and tourneys. The face mask, designed for show, bears a wide curling moustache below a large hooked nose cover. The facemask is removable, revealing an inner barred visor, permitting the helmet to be used in combat. These armour pieces are only the tip of the iceberg of the museum’s armoured offerings. Elsewhere in the gallery you’ll see several suits of armour worn by royalty, and many other magnificently preserved and ornate specimens. In particular, look for the sets of Gothic armour, the field and tilt armour of Robert Dudley (Earl of Leicester), and the Lion armour (boasting the finest decorations in the museum) made for French King Henri II.

I move on to the Royal Armouries Museum War Gallery on the second floor. It’s a walk through the pantheon of the development of military equipment; ancient Macedonian and Greek helmets and breastplates; Roman blades, spears, swords, and shields; Anglo-Saxon, Norse and Viking spears, shields, swords and helmets; Norman crossbows; early medieval mail tunics and longbows; late Medieval Gothic armour; and then I’m brought to a stop at the 16th century section.

A huge diorama, measuring about half the size of a cricket pitch shows two armoured knights on horseback with sword and lance, beating back five foot soldiers armed with muskets, swords and 5-metre long lances. This diorama, a scene from the Battle of Pavia, was fought between the Spanish and French, and the knights are not faring too well by the looks of it. The realistic life-size figures conjure up a vivid vision of what battle must have been like in this era.

Nearby, in the War Gallery, is a thorough coverage of the development of firearms. Early firearms dating from the 14th century were simple muzzle-loading barrels of bronze or iron, which had superceded the crossbow as the primary small arms weapon. Then came the matchlock, another simple mechanism that used a slow-burning length of matchcord which had to be clamped in the serpent, kept free of ash, and pulled into the priming pan to ignite the powder. Not such a good idea on a wet or windy day. Not to mention the fact that by the time one had completed this time-consuming procedure, the enemy would have probably been within sword’s length of the hapless musketeer.

Then, around 1500, came the Wheellock, a fire-striking device based on a tinder lighter, that used a spinning steel wheel to strike sparks from a piece of iron pyrites. The forerunner of the pistol, the wheellock permitted one-handed use and enabled firing while riding on horseback. Then, in the 1580’s came the invention of the Flintlock, a more reliable ignition device that used the striking of flint on steel to create the ignition spark. Although undergoing many mechanical permutations, the flintlock was used almost universally from the mid 17th century to the mid 19th century.

Dozens of mint condition matchlocks, wheellocks, and flintlocks hang in glass cases for all to admire. One notable gun is Captain Patrick Ferguson’s new rifle. In 1776 he demonstrated his rifle to a skeptical British Board of Ordnance, producing an impressive rate of fire of four rounds a minute. His rifle was a great improvement over the muzzle-loading muskets, and could shoot accurately to 300 yards, far beyond the scope of the musket. Today, only six of Ferguson rifles exist, and the museum displays Ferguson’s own prototype—probably the one he used to demonstrate to the Board of Ordnance, making it a very historic piece indeed.

With the advent of the industrial age, around 1850, the production of military forearms became largely mechanized. American manufacturers like Colt had shown it was possible to use unskilled labour to produce perfectly adequate firearms, with few skilled workers needed for hand finishing. British firearms manufacturers like Enfield followed suit, using technology to create interchangeability of parts, uniform and fast assembly.

I continue up to the 4th floor of the Royal Armouries Museum, to the Oriental Gallery to be confronted by a massive, rampaging, armoured elephant. This behemoth beast, with two warriors perched atop, is covered in 118kilograms of armour, made from 8,450 iron plates joined by rows of riveted mail. Elephants played a significant part in warfare from 1,000 BC until the 19th century. Their main roles as fighting animals found them trampling men and horses, picking up and throwing men, and wielding wicked looking swords attached to their tusks. They must have been truly fearsome animals in battle.

Also on the 4th floor I visit the Self Defence and Hunting Galleries. For antique pistol collectors the hunting gallery is a dream come true. You’ll see some of the finest and most beautifully decorated pistols and hunting rifles in existence. The Self-Defence Gallery is also worth a stroll through. I found the Dueling gallery quite fascinating, learning about the rituals and procedures that were used to settle matters of honour through the arcane practice of dueling. Great stuff!

Sadly, space does not permit me to elaborate any further on the remarkable artifacts at the Royal Armouries Museum at Leeds. Needless to say you’ll find the other displays that cover pistols, horse armour, and the development of swords equally as informative as the other topics I’ve briefly mentioned here.

I visited the Royal Armouries museum on a perfect summer’s day in August, emerging quite stunned from the impressive collection in this superb modern museum. For the weapons aficionado, or even just the mildly interested, the Royal Armouries Museum is not to be missed. Plan on several hours for your visit, because time just flows away as you inspect this magnificent array or weapons and armour.

The Royal Armouries is Britain’s oldest national museum, and one of the oldest in the world. The Royal Armoury sites in Leeds, HM Tower of London, Fort Nelson, and Louisville, Kentucky, exhibit over 65,000 objects. The museum can be traced back to the mid 17th century, when, after the royal armours were brought to the Tower from Greenwich and elsewhere, and put on display. Over the following centuries, the collections grew steadily as war trophies like cannon, drums and flags were added to the display. Her Majesty the Queen granted the title Royal Armouries in 1983. Return from Royal Armouries Museum to Military History