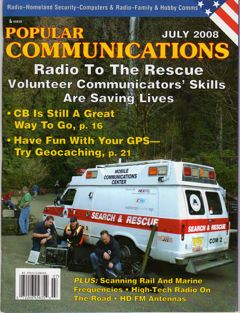 How about this Mission Impossible for a Communications Team? Coordinating large search and rescue operations spanning multiple counties with terrain obstacles and geographical challenges around Mount Hood, Oregon. And facing logistical difficulties of incompatible radio equipment and frequencies, involving up to 28 different agencies in a life or death situation where time is critical.

Sound like a challenge? These are problems routinely faced and overcome by Portland’s Mountain Wave Emergency Communications Search And Rescue (SAR) organization. Their rescue track record is as impressive as their equipment list--and this team has communications equipment that makes most military comms specialists drool.

Mountain Wave has been involved in SAR operations that have made national news, with much high drama and danger--they responded to 90 live missions in 2007. In February, 2007, for example, they were instrumental in rescuing 3 climbers who slipped from a ledge at the 8,300 foot level of Mt. Hood, about 60 miles east of Portland, Oregon. After falling 300 feet one of the group activated a mountain locator unit and contacted emergency dispatchers.

The three climbers were asked to huddle in their sleeping bags by the Mountain Wave crew. Shivering, wet and cold, with their Labrador retriever, they waited for the 30-person rescue team to scramble up the mountain in hazardous white out conditions including heavy snow and 70 mile per hour winds. The lost climbers were found using the locator unit’s signals.

This emergency ended happily—the climbers were brought down off the 11,239-foot mountain by the rescue teams--with only minor injuries. They were bundled into a snow cat and transported to a waiting ambulance at a state campsite.

How has Mountain Wave achieved the distinction of leading the nation in efficiency, equipment and trained personnel? Russell Gubele, Command Officer for Mountain Wave SAR explains, “Our teams train often and rigorously. We always train as if the missions were real. We stay on top of cutting edge technology and adapt it to the SAR environment. This often means we have to build our own interfaces and write custom software”.

With a mission of “providing communications support for search and rescue missions, ranging from tactical communications in technical rescue situations with a handful of rescuers, to large-scale systems for multi-day search operations covering large regions and hundreds of people” their success is legendary around the country. A secondary mission is to “provide communications for natural disasters and other emergencies”.

One reason for Mountain Wave’s high proficiency rate is its highly trained team of 40 persons (20 in the comm. Unit, and 20 in the 4 X 4 Unit). Certified with the State of Oregon for search and rescue, its members are registered Emergency Service Workers with Clackamas County and the State of Oregon. An in-house search and rescue training program includes communications, use of field equipment and dispatching, with almost all members holding amateur radio licenses.

Despite this rigorous training not all SAR operations end happily. There have been 35 climbing deaths on often-treacherous Mt. Hood, due to chance and bad luck. It’s one of the most frequently climbed mountains in the world. Here’s one such mission that went awry. In May 2002, three climbers were killed and three critically injured when nine climbers fell in a crevasse only 800 feet from the summit of Mt. Hood.

Things went from bad to worse after the Air Force Reserve Pave Hawk helicopter sent in to rescue the survivors crashed into the mountain. It tumbled down the slope, seriously injuring one of the five crewmen, underscoring the hazards facing rescuers every day on SAR missions. “We received several awards for this mission, including an Oregon State Emergency Medical Services Unit Citation”, Mountain Wave’s Command Officer Russell Gubele tells me.

The communications technology owned by Mountain Wave helps tremendously. When a party of three climbers got split up into two groups, on December 10, 2006. One of them used his cell phone to call and tell his family they were in trouble. Despite a severe snowstorm the rescuers eventually found his body in a snow cave—he’d succumbed to hypothermia. “The mission ran for several days. We tracked the cell phone to within 20 feet. We received the Clackamas Country Public Service Award for our work on this mission”, Gubele says.

“Com 1”, a modified 1989 4 x 4 Chevy Suburban, acts as a remote mobile relay. And it’s got some serious juice. It has a dual battery system, and shorepower, with 110 volt plugs in the vehicle so equipment can be used from power provided by a generator, or other source.

“Com 2”, a converted Ford Ambulance, is a mobile dispatch center that complements the sheriff’s mobile command post—its’ communications technology includes two 911 dispatch positions, computers and radios on all frequencies. The dispatching positions have radios within reach of both operators who also have their own flat panel color PC and wireless keyboard. Their toys include flush mounted VHF and UHF, and 800MHz radios with whiteboards for notes, an air band radio, Military radio, and scanner and multi-band amateur radio.

So how does Mountain Wave provide a communications network for the other organizations? Their field teams work alongside the technical rescuers and ground search squads as part of the overall team. This frees up the other personnel to get on with the technical rescue, and medical aid if needed.

They’re expert at establishing radio relays in remote locations, such as canyons where they tend to be out of radio “view”. Thus when an EMS team or search team drops into a canyon, Mountain Wave will maintain the comm. link to base. They’ll also establish Radio Directional Finder (RDF) communications, coordinate with aircraft for medical evacuations, and help locate signals from Mountain Locator Units (MLU), and even set up Landing Zones for helicopter loading and unloading.

Mountain Wave uses tactical bridges that allow them to patch several radios and frequencies together, and the radio over IP allows them to dispatch from a laptop. The group’s genius for innovation and invention has enabled them to build tracker units to track searchers and plot their GPS location on a topographical map.

By coordinating this mix of comms. equipment, the Mountain Wavers are able to link up searchers and rescuers on the ground, aircrew if needed, and EMT’s with the alphabet soup of agencies involved, and towns and hospitals. While they are not the primary coordinators of the rescue missions, they are the “voice” of SAR operations and their expertise is often the deciding factor in locating lost or injured mountaineers.

Emergency simulations, held several times each year with such organizations as Portland Mountain Rescue, the 304th Rescue Squadron, the Clackamas Sheriff’s Department, the U.S. Forestry Service, and the American Medical Response Reach and Treat team, provide valuable practice for real situations. Gubele tells me, “We have also been a leader in promoting and facilitating interoperability between agencies. We often consult with these agencies on their unit”.

One simulation in April 2006, involved “missing” climbers with mountain locator units at an 8,500-foot elevation on Mt. Hood. In this exercise a simulated avalanche swept away a rescue team. A second team had to locate this team before turning their attention back to the original “lost” climbers. All were located alive by using the avalanche beacon signals of the buried team, then later the others were found in a snow cave using MLUs.

As recently as January 2008, two lost men on Mt. Hood were guided and located by such technology. After being overdue from their climb and lost in a whiteout, they were called on their cell phone. They were in a snow cave, but the Sheriff had no idea where they were.

Gubele explains how Mountain Wave saved the day. “Because we were monitoring their cell phone, we knew when it popped back into service and we called them. They were surprised when their phone rang! We also knew within a mile where they were based on our cell tracking”.

By good fortune they’d stumbled across a geocache, a box used in a kind of backcountry treasure hunt that contained their GPS location. This enabled the searchers to zero in on them and bring them back safely to Government Camp.

Emergencies with lost people are commonplace. In 2006 the Clackamas County Sheriffs Search and Rescue team was activated 117 times, with Mountain Wave involved in many of those searches. It is difficult to assess how many lives the Mountain Wave team has saved through their expertise, but it’s safe to say that there are a large number of people alive today that owe their existence to this group.

Return from Mountain Wave to Communications