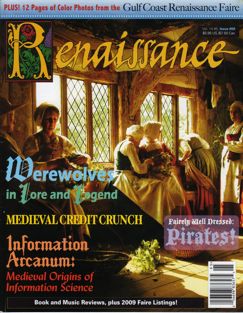 Prague is often referred to as the jewel in the crown of central Europe, and for good reason. Its rare combination of well-preserved Renaissance, Romanesque, and Gothic architecture, make it a dream for lovers of all things medieval. And one atmospheric, darkly lit little restaurant that recedes down some narrow stairs into a labyrinth of small rustic rooms does its best to bring back the feeling that you’re in the dark ages.

The Medieval Tavern (Stredobeka Krema), located in the shadow of majestic Prague Castle, on Thunovska Street in Prague’s historic Little Quarter, is a fun place for renaissance aficionados to go back in time and imagine what life was like in olden tymes. As you approach the tavern entrance you see an old gnarly, longhaired beggar (or model thereof) in ragged pauper’s clothes, reaching through black steel bars down at ankle height begging for alms.

When you enter you’re greeted by a raucous shout from the leather jerkin and breeches-clad hostess, and told to sit down somewhere. The innkeeper will wander up and check to make sure you’re not the king’s tax collector, then ask if you have the money to pay for your meal. Once your bona fides have been established you might receive a menu from which you can order hearty medieval fare like the Poor Traveler’s Plate, the Robber-knight’s Plate, or Beefsteak from a stout bull. Or if you’re strong of constitution try the “pig internals”, and pickled sausage.

The delicious meals, loaded inches high with meat, are large enough to satisfy a hungry plowman. Wash it down with a tankard of the best Czech Pilsner, warm honey wine, or absinthe. But this medieval tavern is not a just a Disney prop for tourists—it’s authentic—“Open Daily since 1375 from 12 a.m. – 12 p.m.”, according to the website.

You can descend down several levels of stone stairs to a series of small caves and sit at the stained, rough-hewn centuries old tables, lit only by candles in metal holders, and small covered lights. The décor in the lower rooms adds to the medieval ambience—the ceiling is completely lined with skulls. When I ask if they’re real or not, the proprietor just laughs.

Its walls could tell some fascinating stories about the people, famous and infamous, who frequented the tavern. King Wenceslas IV was known to slip down from the castle into the tavern’s dark interior in disguise, to drink with the peasants. Composer Wolfgang Amadeus Mozart drank here. One of the Czech Republic’s famous writing sons quaffed beer here—19th century satirist and journalist Jaroslav Hasek, whose book The Good Soldier has been translated into 60 languages. Even famous alchemists of Prague drank here, no doubt discussing how to turn dirt into gold.

One of the Tavern’s more sinister clients was Jan Mydlar, born 1572, who was Prague’s chief executioner (and torturer) for many years. Mydlar was renown for his execution of 27 Bohemian rebel leaders on June 21, 1621. Other rogues and fraudsters would plot their crimes here, all leaving their ghostly essence in the cellars and caves of this underground maze.

On weekends the tavern hosts medieval entertainment ranging from fire eating, sword swallowing, dancing, juggling, and period music including drums, flutes, and other instruments from the middle ages. If you go, be sure to book a table for weekends because they sell out well in advance.

Return from Medieval Tavern to Travel and Culture