Renaissance and Medieval
Cannon and Artillery
By Roy Stevenson 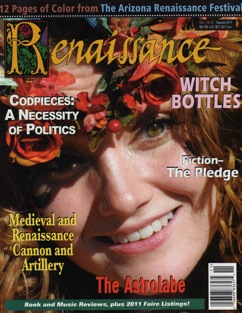 “They made a sound like thunder and caused much loss in men and horses”, wrote the Italian chronicler Mezeray, a witness to the Battle of Crecy, France, on 26 August 1346. Describing the first major battle in Europe where gunpowder artillery was used, he wrote, “they struck terror into the French army, it being the first time they had seen such thundering weapons”.

In this battle, England’s King Edward III’s army of 3,000 men-at-arms and knights, and 10,000 archers, faced overwhelming odds: 60,000 Frenchmen, including 12,000 heavy cavalrymen, plus 6,000 Genoese crossbowmen. Greatly overconfident with their large numbers, the French loosed their cavalry in charge after charge, 15 in all, each time meeting withering fire from Edward’s longbowmen.

Then Edward unleashed his secret weapon — six cannons, concealed among the archers. Wrote Giovanni Villani, an Italian historian who witnessed the battle, “Their effect was most fearful, fire that throws little balls to frighten and destroy horses”. The French finally gave up the battle, leaving 1,500 knights and over 10,000 men-at-arms dead on the battlefield.

The English medieval cannon fire at Crecy is not likely to have made a significant difference to the battle’s outcome, nor taken much of a toll on the French army, because each gun only fired a few rounds during the entire battle. However, it certainly gave the French a considerable fright, and may have contributed to their inglorious retreat.

Above all, it marked the historic first use of artillery in a major European battle. Artillery cannon had made its presence felt and there would be no going back. The battle at Crecy signaled that the time for gunpowder had come—and it would change the face of warfare for centuries to come.

The Chinese, believed to be the inventors of gunpowder, had used it in warfare as early as 908 AD, but only as a noisemaker to unnerve the enemy with its “thunder and lightning”. They had also planted gunpowder beside the enemy’s military structures to demolish them. But the “black powder” was not used to ignite gasses to propel stones out of a gun tube until around 1300 AD.

Artillery had been used previously, of course, in the Middle Ages, but had not used gunpowder’s chemical energy to fire stone and metal or stone projectiles. Instead, for centuries, a large wooden siege machine called the trebuchet had been used to catapult large stones, using mechanical energy.

Artillery would take the best part of a century to gain acceptance as a viable means of warfare in Europe. In fact, during the first half of the fourteenth century, it was common for traditional siege equipment like the trebuchet to be used alongside small cannons. Earlier records show that Edward III used artillery against the Scots in 1327 and 1328, where the dismayed Highlanders called them “infernal crakys of war”.

By 1380, gunpowder artillery was being used regularly on the battlefield, despite much resistance from traditional soldiers of the time. Horse cavalry regarded these weapons as diabolical and unworthy, because they could kill from a distance without hand-to-hand contact—definitely against the knight’s code of chivalry!

It took until the late 1500’s for the archer and his longbow to be completely phased out of the English army—and for good reason. Early cannons were notoriously unreliable, inaccurate and difficult to control when firing. In practice, the recoil, the poor quality of the powder and the fact that the early guns overheated quickly, made them almost as dangerous for the men operating them as for the enemy.

However, the noise they made when fired, the plumes of black smoke they belched out, and the shower of brilliant red and yellow sparks, had a rather daunting effect on the foe. Some even thought the enemy had harnessed a dragon. Appropriately, in the early 1400’s the bombardiers adopted St. Barbara, the patron saint of thunder and lightning, as their benefactor.

By 1400, artillerists had emerged as specialized soldiers. These gunners were regarded as very different from the rank-and-file soldier—many believed them to be in league with the devil. By the beginning of the 16th century professional gunners, now called bombardiers (bombus = Latin for “muffled sound”) with their high level of skills and knowledge had become a valued commodity. Artillery became the third arm of armies, alongside the infantry and cavalry.

Artillerymen had by now organized themselves into guilds with several rankings: master gunners, gunners, apprentices, and gun servers. By 1500, groups of gunners, or individual bombardiers, were hired as mercenaries by cities and states throughout Europe, and made a good living at their dangerous trade. Even when captured by the enemy, bombardiers and their assistants were well cared for, and pressed into working for the enemy.

Early cannons were called pots de feu (pots of fire) because they resembled a large cast bronze round pot-like bulb at the breech end, narrowing to a bugle like tube at the muzzle end of the gun. They were shaped very much like a kitchen baster.

Occupational Hazards of the Early Artilleryman

Fifteenth century bombard guns, made with hoops and staves, would often develop weaknesses in the longitudinal bars, splitting apart or separating while firing, spraying lethal high-powered fragments of metal around the gun.

Early bronze guns were cast in Bell foundries that as you could imagine, led to some serious problems with the guns. Poor metallurgy of the gun barrel created weaknesses in the gun barrel or breech. The two main culprits, trapped air pockets and undetected fault line fractures, eventually resulted in these faults blowing open while firing, often killing, burning, or seriously wounding the gun crew.

Other barrels would become prone to rupturing and exploding without warning as they became progressively stressed from the constant high explosive pressure of firing, also with devastating effect on the crew.

After casting the gun barrel, gun makers would load and fire the cannon with larger and larger charges, until it surpassed the tolerance for which it had been designed. This method was called proving the barrel. One can only imagine the short lifespan of these testers! Once the gun barrels were passed by this test, the crest of the gun maker or foundry was stamped on the barrel. You can still see these crests, many quite elaborate and artistic, on ancient gun barrels in artillery museums.

Other catastrophic mistakes that could end in disaster were when the gunners placed too large a load of gunpowder in the gun, often resulting in a barrel explosion. The necessity of placing the gunpowder near the cannons sometimes caused it to ignite, burning the gunners.

Arrow-shaped projectiles were fired from pots de feu, and used primarily against men-at-arms on the battlefield. The projectiles were large metal arrows, bound by leather wrappings, and rammed into the gun barrel.

The first ball projectiles were made of stone and shaped by stonemasons. Often they were hewn from local rocks on the spot during sieges. These stone balls caused little damage to castle walls, smashing into small splinters on impact, but the small shards wreaked havoc with the defenders.

Later, around 1500 AD, stone balls were replaced by iron and lead balls, and proved much more effective for smashing down castle walls. Being a more perfectly shaped ball, they allowed less gas to escape around the ball as it was fired up the cannon’s barrel. Thus they were more powerful, and were used to batter castle walls. They would also cut down wide swaths of soldiers or cavalry unfortunate enough to get in their way, “taking off the odd head here and there”. Spent iron balls were dutifully collected by the enemy, melted down and recast for their own cannonballs.

Incendiary iron cannon balls or stones were created by coating them in tar, and the flash from the gunpowder explosion would ignite the balls, creating a flaming projectile that would set fire to wooden buildings.

By the 15th and 16th centuries, artillery had become a force to be reckoned with, and greatly affected battlefield tactics. In the 15th century the Duke of Burgundy massed all his artillery together into large batteries, thus increasing and concentrating their firepower. Previously, the cannons were spread out around the battlefield, diluting their effect.

Before gunpowder artillery, battles were fought at close quarters in large-scale melees. With the advent of artillery, the battlefield became more spread out, and cannonball exchanges often took place over thousands of yards.

As time went by, gunpowder making techniques were improved, using the process of milling or corning, making it more powerful. Around 1460, light cannons were developed with a cast bronze barrel. Mounting these guns on carriages made them more maneuverable, enabling them to be rapidly shifted around the battlefield as events unfolded.

By the 15th century, cannon barrels were made in a single cast, using iron. This enabled the gun to use the improved gunpowder and resist more powerful blasts. Now, the projectiles could go further, and cause more damage.

This process also enabled the gun makers to make cannons of enormous size, called Bombards, mainly for use against castle walls in sieges. Bombards were fired at low angles, directly at the base of the castle walls with the objective of collapsing them. This tactic worked well, so fortifications were thereafter constructed much thicker at the base, with earthen banks constructed outside them for added protection, as countermeasures. During the siege of Bordeaux in 1453, a French artillery tactician, Jean Bureau, directed 250 cannons of various sizes against the English, besieged in a castle.

Short, dense mortars shaped like dustbins were also developed for lobbing huge stones or balls high over defensive castle walls. A version of the mortar, the petard, was used to blow open castle gates, and a variation was still in use on D-Day in World War II for breaching concrete bunkers.

Many different cannons of widely differing lengths, calibers, and bores, were created, depending on their purpose. During the Tudor period, names of birds and mythical animals like Robinet, Falcon, Serpentine, Culverine (a mythical serpent that spat fire and smoke), Dragon, and Basilisk, were given to some types of cannon. Other general categories of cannon common during the 15th and 16th centuries include the Saker, Culverin, Minion, Veuglaire, and Ribaldequin. Many sub-categories of these cannons were cast, all with their own characteristics.

The introduction of gunpowder, and the consequent development of artillery as a new mode of warfare greatly changed the conduct and tactics of battle in the medieval and renaissance eras. The creation of the guns described here, and their many sub categories are the forerunners of today’s artillery.

When Were Cannons Used on Ships?

French ships, as early as 1338, mounted surprise attacks on English coastal towns using cannons attached to their decks. By 1347, the English were mounting cannon on their own ships for defense and coastal raids.

The ships guns were the same models used in land warfare, but were placed on moveable carriages that suited the below decks placement of the guns in their ports. Return from Medieval Cannon to Military History