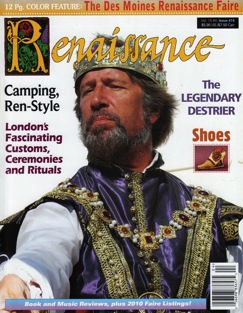 Thousands of fascinating and intriguing myths and folklore are interwoven into London’s history and culture. Many of these customs and ceremonies still manifest themselves today in a variety of strange, creative and often hilarious rituals. At the drop of a hat Londoners will do all sorts of odd things, based on these legends. They’ll dress up in medieval costumes, disguise themselves as trees, look for ghosts wandering around church knaves, pay homage to an old stone by the roadside, and talk of powerful witchcraft and sorcery in London’s bygone era.

Take, for example, the Crowning Ceremony of King Bean and Queen Pea that started during the reign of Edward II (1307-1327) and continued through that of Edward III (1327-1377). At a special ceremony slices of cake were handed out to the courtiers. Among them, one had a pea and another, a bean, baked into them. The courtiers who received the cakes with these objects secreted in them were ceremoniously crowned King Bean and Queen Pea and would reign together for the rest of the night. What was the purpose of this strange ritual? It gave people of the lower court a chance to ascend to the “throne” for a night, a sort of role-reversal. Revived again during the Tudor period, the recipient of the bean cake would choose his queenly consort and reign for the night.

Today, 12 days after Christmas each year (the twelfth night), a group of theater actors re-enact this with a slight twist. With the mission of re-enacting early folklore and dramas, they stage a landing of the Holly Man (the winter version of the Green Man), accompanied by a bagpiper, on the Southwark bank of the River Thames near the Globe Theater.

The Holly Man, splendidly bedecked in green leaves, holly branches, and flowers of all kinds—a moving plant—holds a tall staff sprouting all manner of greenery. Upon disembarking from a cutter, the Holly Man toasts the crowd, the river, and the Globe (the toasts known as wassails), whereupon a folk play (also called a Mumming) is performed, with great gusto. Finally the cakes are given out to the expectant crowd. The people who find the pea and bean in their cake are crowned King Bean and Queen Pea with much pomp and circumstance. Then, the whole procession walks to the nearby George Inn, led by the Holly Man, King Bean and Queen Pea. A long line of medieval garbed revelers follows, to the “George” where the festivities continue with traditional folk dancing and much quaffing of ale, as you can imagine.

Robert Herrick’s ‘Twelfe Night’ mentions this custom in a poem;
“Now, now the mirth comes
With a cake full of plums,
Where Bean's the King of the sport here:
Besides we must know,
the Pea also Must revel,
as Queen, in the court here.”

The Pedlar's Dream of Buried Treasure

Another charming folk tale tells of the pedlar of Swaffham (originally called Soffham), one John Chapman. Barely earning enough to support his wife and children, the pedlar lived in a small cottage with a huge oak tree towering over it in the backyard. One night, John dreamed that if he went to London Bridge, he would hear “very joyfull newse”. He journeyed to London Towne, whereupon he stood on the bridge for two or three days, but “heard nothing that might yield him any comfort”. At last, a shopkeeper who had been watching him asked him what he wanted there, as the pedlar had not been selling anything or begging for alms.

Chapman told the shopkeeper about his dream, whereupon the shopkeeper laughed heartily, and asked him if he was a silly fool to go on such an errand. “I’ll tell thee, country fellow, last night I dreamed I was at a Swaffham pedlar’s house, under a great oak tree, if I digged I should find a vast treasure!” He added, “Now think you that I am such a fool to take such a long journey upon me in the instigation of a silly dream? No, I’m wiser. Therefore good fellow, get you home and mind your business”.

The pedlar “went speedily home and digged and found a prodigious treasure” making him exceedingly rich. After donating much of the treasure to the restoration of his local church, he put the pot that contained the treasure outside his house for sale. Some passing scholars translated the Latin inscription on the pot, as “Under me doth lie, Another much richer than I”. Chapman dug deeper into his garden, in the same spot, to uncover a much more bountiful treasure than the first one.

Today, you’ll see John Chapman all over Swaffham. He’s the figure on the sign at the outskirts of the town. You can visit his burial site in the town church, where he’s also carved into the bench ends, along with a statue or two of him and his dog.

The Legend of Westminster Abbey and the Temple of Apollo

Scant writings by a 15th century monk, John Flete, at Westminster Abbey tell of the believed heritage of the Abbey. A small island (known as Thorney or Thorneia Island) located between the Thames and two tributaries of the River Tyburn (two miles from old London) was inhabited by Neolithic, Bronze Age and Iron Age descendants.

A large Roman temple dedicated to Apollo is thought to have been constructed on the island, to eventually be destroyed by an earthquake. The main archeological evidence consists of a 3rd century sarcophagus uncovered beneath the north green of Westminster Abbey, in 1869. Lucius supposedly converted the temple into a Christian church in the 2nd century.

Equally as mysterious is the supernatural origins of the church of St Bartholomew the Great and the hospital of the same name. A man of “low kynage”, Rahere was a devout courtier in the court of Henry I (1100-1135), and at times served as a jester, minstrel, and clergyman. While on Pilgrimage to Rome, Rahere fell sick with malaria and vowed that if he recovered he would erect a hospital for the restoration of poor men. Miraculously he was cured, and set off for London to build his hospital.

On his return journey he experienced a supernatural visit, or vision, from St. Bartholomew. First, in a terrible dream he was seized by a fearful winged creature and deposited on a high ledge above a horrible pit “deeper than any man could see”. Quaking and trembling with fear Rahere was visited by St Bartholomew himself, who spake, “I am Bartholomew, the Apostle of Jesus Christ, and come to succour thee in thine anguish. . . by the will and commandment of the Holy Trinity and the common favour of the celestial court and council, I have chosen a place in the suburbs in London at Smithfield, where in my name thou shalt found a church.”

Deeply affected by his spiritual experience, in 1122 Rahere petitioned Henry I for land to build the church, and the king gracefully acceded. The land was no more than swamp in the northwest corner of London, but undeterred Rahere recruited a band of willing helpers and set about his task. Founded a year later, both buildings survive today.

Rahere was elected the first prior of the church, which he served for 22 years performing the occasional miracle by healing sick people and returning sight to a blind baby. He is now interred in a tomb to the north of the High Altar in 1405. But the supernatural edge to Rahere’s story does not end there. He is said to haunt the church, disturbed in Victorian times when his crypt was opened and a workman stole one of his sandals. Those who have seen his ghost tell of him walking through the chapel with one bare foot, or silently preaching from the pulpit.

From Whence Came the London Stone?

Inconspicuously displayed in a small stone cubicle inset into the wall behind an iron grill, at 111 Cannon St, EC4, lies the legendary London Stone. This rather ordinary looking block of stone is regarded as the symbolic authority and heart of the city of London. It’s claimed to be the stone from which King Arthur drew Excalibur, or a gatepost from the Roman Governor’s Palace that once stood on Cannon Street—depending on which historian you believe.

To further muddy the waters, some archeologists believe the stone is a remnant of London’s Roman omphalos—its geomantic center—from which the Romans measured all distances in Britannia. In fact, if all the legends about its origins are to be believed, the London Stone appears to have been taken from every major archeological site in the Mediterranean: it was taken from the altar of the Temple of Diana, or brought from Troy by Brutus. The latter gives it one of its names, the Stone of Brutus. A city proverb says, “as long as the Stone of Brutus is safe, So long shall London flourish”.

The London Stone was indisputably of some social significance as long as 500 years ago, mentioned in Shakepeare’s Henry VI Part 2, written in 1590. Deals were made, oaths were sworn, and proclamations were read in front of the stone. Whatever its origin, the stone is believed to possess magical powers, and it clearly holds the future of London within its stony grasp.

Memories of witchcraft and tales of necromancers who affected great battles in mysterious ways were whispered in London’s dark pubs and alleys over the centuries. Two stories stand out above all others. Mother Shipton was the most famous witch of the 1500’s. She delivered prophecies that foretold the Battle of Marston Moor (1644), and the Great Fire of London (1666).

Friar Bungay, a sorcerer, was recruited by Edward IV’s Yorkist army before the Battle of Barnett to help defeat the Lancaster army. The night before the battle (13 April, 1471) Bungay cast his spells from the tower at Hadley Church. The next morning a thick mist so confused the Earl of Oxford’s and the Earl of Warwick’s men that the latter fired upon the former. Oxford’s men retreated thinking that Warwick was turning traitor. The Yorkist army waded in and slaughtered over 1,000 of the Lancastrians.

In life and death, Londoners wore talismans around their neck to protect them from illness and rheumatism, or to protect them in the hereafter from evil. Coins or stones were placed in the mouths of the deceased, crosses on the chest, and padlocks near the pelvis. Pilgrims wore small ampullae filled with holy water or their arduous journeys. Some of these talismans still wash up on the shore of the Thames River during riverside tours.

London is no stranger to odd customs and ceremonies, many dating back for centuries. Whether one chooses to believe these odd legends or disclaims them, one absolute remains. Many Londoners prefer wild accounts of such stories, even when the stories fly in the face of facts, because attractively embellished stories are so much more interesting than objective truths. And they simply wouldn’t be British if they didn’t have some tall tales and legends to pass on.