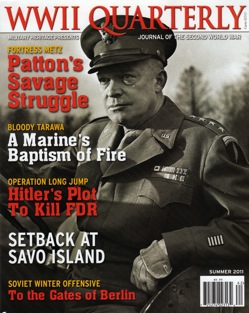 And you’ve got to love a museum that greets you with a behemoth twin pair of 15-inch naval guns from two British battleships when you walk in the front entrance of the grounds.

It takes an hour just to navigate this hall before moving on to the other galleries.

After viewing the Large Exhibit Hall, continue through the hall and down to the Lower Ground Floor to the World War I, World War II and Conflicts Since 1945 galleries. It makes sense to view the 8 World War I galleries first, and then move on to the World War II section that covers The Blitzkrieg, the Battle of Britain, the Home Front, the War at Sea against Germany and Italy, the Mediterranean and Middle East, the Eastern Front, Europe Under the Nazis, the bomber Offensive, the Northwest Europe campaign, and War in the Far East.

These themes are vividly illustrated through some extraordinary documentary films, thousands of well written signs, historic photos, realistic models in uniform, weapons, medals, authentic posters, maps, documents, and more. Some of the artifacts have great historical significance including Herman Goering’s tunic, and the large bronze Nazi Eagle’s cross liberated from the Reichstag in Berlin.

Other artifacts are very poignant: objects like Red Cross food parcels that sustained the Allied POWs through the bitter months of 1945, when Germany’s food supply was collapsing under the Allied onslaught, a POW’s teapot made of food cans, and their metal eating utensils.

The Secret War gallery on the first floor is not to be missed. It tells the story of how the British MI5 decoded enemy wireless traffic and arrested German agents almost as they landed in Britain. Networks of civilians in France and Belgium were set up to pass on strategic information to the British, while the Special Operations Executive recruited over 13,000 men and women from military and civilian backgrounds to wage a war of attrition in Europe.

The Holocaust exhibition on the fourth and third floors is one of the most effective exhibits you’ll ever see in a military museum. It illustrates a horrific part of World War II history very professionally, bringing home the horrors of a nation that somehow got so far off the rails. The introductory gallery illustrates how Hitler and his gang influenced the German nation and why the German people perpetuated or tacitly supported the worst chapter of genocide in the history of mankind. The exhibits and displays in the next dimly lit gallery leave you shaken, pondering the question, “How could such a cultured country go astray so badly?” Parents will need to put some thought into whether their children are prepared for this rather grim section.

The Imperial War museum building itself is suitably staid for the purpose of showcasing Britain’s glorious military history. Completed in 1815, the current museum was the central portion of a hospital, and converted to the military museum in 1936.

Plan to spend a full day at the IWM, although you might be better dividing it up into two half days to properly absorb the detailed information that is presented at every turn, and the overwhelming number of exhibits. It’s also a good idea to take a mental breather every couple of hours while you take lunch or refreshments in the café. It would be ironic to suffer from “shell shock” in a military museum.

An audio guide is available to let you tour the museum at your own pace. There’s also a highlights tour of the main galleries, which covers 40 key exhibits. The museum’s guidebook is well worth buying to read as you go through the galleries and the excellent gift shop stocks an impressive selection of books and militaria for sale.

There is no entrance fee to the IWM, except for special displays. Be sure to get a map of the museum to get you oriented—the museum is large and there are many exhibits. If you have limited time you would be wise to prioritize which galleries you wish to see.