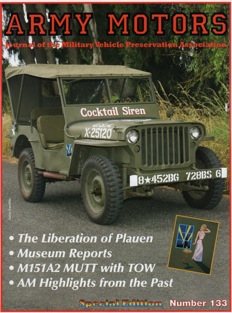 Although the Fort Lewis Military Museum is open to the public you must first register yourself and vehicle at the Visitor’s Center. To get to the Visitor’s Center take the Exit #120 off I-5, about 45 minutes south of Seattle. You’ll need your driver’s license, vehicle registration, and proof of insurance to get a Temporary Vehicle Pass and Visitor Badge.

A 10-minute drive south following the museum signs and you come to a large white building with steep inverted-V black roofed wings jutting out at either end—you can’t miss it because it’s surrounded on two sides by an eclectic group of military vehicles in a vehicle park.

The military olive drab-painted vehicles look well preserved, like they’ve just rolled out of the factory. Laminated information cards hang from their sides. With a little imagination you can see this convoy rolling along through the countryside in World War Two France or Belgium. A few of the more modern and recent spoils of war look somewhat battered, taken as souvenirs from Operation Desert Storm.

“After a number of units brought back equipment from Operation Desert Storm, we soon had several heavy weapons and vehicles captured from Iraqi forces”, museum curator Alan Archambault tells me. “Our vehicle collection was well established before 1987, when I came on board”, he says.

You marvel at how war leads to the creation of ingenious specialized vehicles as you walk around an M3A1 Half-track troop transport, an M-8 Greyhound Armoured Car, a DUKW 353 Amphibian truck and an M5 High Speed Tractor. These very different World War Two utilitarian vehicles are still used today in many countries.

Cold War armoured vehicles and guns are also well represented. There’s an M-60 Patton tank, made in 1962, one of 15,000 variations produced, and still used in many third world countries.

The massive 64-ton M-103A1 American Heavy tank is a rare find--only 300 were ever built. Nearby, I see a large tank that looks suspiciously like a Soviet T-54, and as I get closer, see it’s a Chinese Type 59 Main battle tank knock-off of the Soviet T-54. About 1500 of these were in service with the Iraqi Army in 1990, and all were destroyed in Operation Desert Storm, or later scrapped. As newer models in the T-series replaced it, the T-54s were flogged off to third world nations.

More exotic light-vehicles featured are the XR 311 Experimental High Mobility Vehicle (aka “Dune Buggy”) of 1970s, and the Experimental Fast Attack Vehicle now used by Navy SEALS. “During 1972-1991 the 9th Division was posted here”, Archambault informs me. “They used and tested a number of wheeled vehicles including several prototypes for the HUMVEE and the Fast Attack Vehicle, which is basically a modified dune buggy”.

Having toured the vehicle park I enter the museum. A plaque mounted on the front wall tells me it was originally known as the Red Shield Inn, and is listed on the National Register of Historic Places. It was used as a guesthouse and officer’s quarters until 1972 then became the home of the Fort Lewis Military Museum.

The museum’s mission is to preserve and interpret material of historic significance to Fort Lewis and the military units that have served there. A secondary theme is to show how the U.S. Army played a major role in the exploration, settlement, and defense of the Pacific Northwest.

I see a group of twenty soldiers in BDU fatigues listening to Archambault. He’s delivering a military history lecture to them as part of their heritage training, I learn later. Archambault’s enthusiasm about the museum’s fascinating artifacts shows through--he’s an ex-army man, even participated in reenactment and historical groups, and early on decided he wanted to be curator in a military museum.

I start at the Soldiers of the Northwest Gallery and proceed through the Fort Lewis Gallery of Valour, The Army Family Gallery, the Art Gallery, America’s Corps Gallery, and finally the Fort Lewis Gallery. The collection of memorabilia, artifacts, uniforms, weapons, military art, equipment, dioramas, photographs, documents and many other pieces is one of the finest in the country.

A diorama of a barracks scene depicts army life; military uniforms of all belligerent parties in World War Two including a German Officer; Japanese army weapons and uniforms; and a comprehensive World War Two weapons exhibit are amongst the thousands of artifacts displayed.

A “Women in Wartime” display shows women on the home front and in uniform; there’s a model of an army nurse in uniform, stethescope around her neck. A G.I. mans a machine gun in the ruins of a Belgian house in a World War Two battle scene. Another shows two soldiers in a World War One trench.

I soon learn there’s a lot of history at Fort Lewis. Named after Meriwether Lewis, leader of the famous Lewis and Clark Expedition to the Pacific Northwest from 1804-1806, it was founded during World War One as Camp Lewis.

Since becoming a permanent Army post in 1927, it’s served as a major training and personnel centre for many divisions during World War Two, the Korean War and the Vietnam War. Lt. Col. Dwight D. Eisenhower served at Fort Lewis from November 1940 to June 1941, as chief of staff of the IX Army corps.

It’s been over two hours since I started my tour of the vehicles and museum, and I’m impressed. The well-preserved vehicles and the overview of Fort Lewis’s proud role in U.S. military history have kept my interest. This museum is well worth visiting if you are in Washington State looking for a professionally designed military museum.