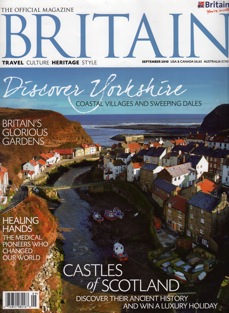 British history is full of medical heroes like Florence Nightingale, William Harvey, John Hunter, Edward Jenner, John Snow, Alexander Fleming, and others whose groundbreaking discoveries saved countless numbers of lives in England and around the world. Many of their theories and methods still underlie our modern medical practices today.

Florence Nightingale, known as ‘The Lady with the Lamp’, is one of Britain’s most renown and visionary health figures, who fortunately received due recognition for her humanitarian work during her lifetime. It is said that she was the second most influential woman in Victorian Britain, after Queen Victoria, and she is still regarded as one of the most famous women of the 19th century.

As with many people ahead of their time, Florence Nightingale met strong opposition from the medical establishment as she turned nursing, once regarded as unsuitable work for an educated young woman, into a respectable profession, inspiring untold generations of men and women to enter the field.

Driven by her strong Christian faith, Florence felt a calling by her 17th birthday to be a nurse. Her parents were mortified, and refused to let her train at a hospital in Salisbury. They had good reason for this; at that time hospitals were dirty and dangerous, and more often than not, the nurses were drunk, and considered “immoral, illiterate, and ignorant in demeanour”. Opposition from her parents only made Florence more determined to enter the field, so she studied nursing in secret. Her parents eventually relented, and Florence Nightingale was allowed to enter nurse training at Kaiserswerth, a religious community near Dusseldorf, Germany. Here, she learned about medicines, dressing wounds, caring for the sick and terminally ill, and observed amputations. She loved it, writing in her diary, “Now I know what it is to love life”.

After working briefly in a private care home for “gentlewomen” in London, Florence Nightingale worked in the Middlesex Hospital, caring for Cholera victims, who were dying by the thousands in 1854. Then, later that year came the Crimean War.

In the Crimea, with the complete lack of understanding of the necessity for good hygiene in preventing disease, almost as many British soldiers were dying or being bedridden from illness and exposure, as from wounds. Thousands of half-starved, sick and dying soldiers arrived in the British military hospitals in Scutari, Turkey, to endure horrifying conditions. The British press soon picked this up and wrote of the scandalous situation, launching a public outcry. Sidney Herbert, the minister of war, knew Florence and sent her and a team of nurses to Scutari to address the problem. Arriving in November 1854, the nurses were appalled at the unsanitary conditions.

The finest moment for Florence Nightingale had come. She tirelessly set about cleaning up the hospital. The nurses and soldier’s wives cleaned shirts and sheets; bed pans and toilets were emptied; scrubbing brushes, buckets, blankets, and operating tables were purchased from donations; and Florence made history by walking the hospital corridors every night, holding aloft her oil lamp.

She greatly reduced the mortality rate in the hospitals, and the soldiers adored her. Sadly, in 1855, overworked and exhausted, Florence contracted “Crimean Fever”, or what we now know to be Brucellosis, a disease transmitted from tainted milk. News of Florence Nightingale's devotion to “her” soldiers soon became widespread in London, and her enduring legend was born. She became famous, and returned to England in 1856, emaciated, ill and exhausted.

Being a very private woman, Florence Nightingale stayed with her sister, Parthenope, at Claydon house in Buckinghamshire to escape the fanfare of public acclaim. From here she did much of her writing and entertained the nurses-in-training from her school. The National Trust has recently opened up Claydon House as a museum. Exhibits include letters she sent to her sister and to her step-niece, Margaret, and rare photographs of Florence with her student nurses and with her step-nieces and nephews.

Upon her return to England, Florence now had popular support for her cause, even meeting with the Queen to discuss the health problems she had witnessed in the Crimea. With Queen Victoria’s notoriety as an iron maiden, and Florence’s emerging strong and willful personality, it must have been an interesting meeting; and indeed the queen pledged her support to Florence’s cause to improve sanitary conditions in Britain’s military hospitals.

Florence continued to lobby for better medical conditions for her soldiers, even in peacetime, when 1,100 soldiers per year were dying from preventable disease in their home barracks. Florence wrote over 200 papers, books, and reports advocating a holistic approach to health, and the need for cleanliness, warmth, fresh air, light, and a good diet for proper recovery. Clearly this lady was decades ahead of her time.

While Florence was still in the Crimea, over 44,000 pounds was raised to set up the Nightingale Training School for Nurses at St. Thomas’ Hospital, London. The school opened in 1860. You can visit Florence Nightingale’s original Nurse’s school at the Old Operating Theatre, Museum and Herb Garret ( http://www.thegarrett.org.uk) This museum is tucked away in the attic under the sloping roof of St Thomas Church not too far from the newly refurbished Florence Nightingale Museum in London (http://www.florence-nightingale.co.uk) located on the site of the permanent Nightingale Training School for Nurses at St. Thomas Hospital which opened in 1862. Here you can see over 2,000 personal and medical artifacts that she owned, or that were used in her era. Objects displayed here include the slate Florence used as a child, the medicine chest that she took to Turkey, her stuffed pet owl, some of her original publications, a Turkish lantern used in Scutari Hospital during the Crimean War, a Register of Nurses who were sent to Military Hospitals in the east in1854, nurse’s uniforms, historic photos, and much more.

Florence Nightingale received the Royal Red Cross in 1883, and the Order of Merit in 1907. Despite recurrence of the disease she contracted in the Crimea, she lived to age 90, expiring on 13 August 1910. Her birthday is still celebrated every May, in Westminster Abbey, and this year is the centenary of her death.

William Harvey was a 17th century British physician who left his mark on medicine. He was the first to describe and detail the systemic circulation of blood as it is pumped around the body. As physician in charge and lecturer at St Bartholomew’s Hospital, Harvey wrote his 72-page paper on blood circulation in 1628, which was disbelieved by most physicians of the time. Harvey later became personal physician to King Charles I.

John Hunter, a Scotsman born in 1728, was an accomplished surgeon and lecturer who pioneered many new scientific techniques, especially for military applications. After working with his brother and physician William in their anatomy school in Covent Garden for 12 years, John signed up as an army surgeon and worked in France and Portugal. He developed new ideas on the treatment of gunshot wounds and venereal disease based on his military experience—but it is his collection of medical exhibits, curiosities and anomalies originally kept in his house in Leicester Square that he is most remembered for. It was deemed important enough for the government to purchase and present to the Royal College of Surgeons in 1793. Don’t miss the Hunterian Museum at the Royal College of Surgeons (http://www.rcseng.ac.uk/museums), also in London.

Edward Jenner (1749-1823) was a student, friend and associate of John Hunter, and is best known for his discovery that vaccination with cowpox prevented the deadly smallpox. He quickly became an expert on vaccinations, and therefore the father of immunology. His discovery would have saved countless millions of lives since his work in 1796. You can visit his house, now a museum in Berkeley, Gloucestershire (http://www.jennermuseum.com), that celebrates his medical achievements.

John Snow, a leading British physician during the Victorian period is considered one of the founders of modern epidemiology. He identified the source of cholera on London’s crowded and unsanitary streets during an outbreak in 1854. By recording the location of cholera deaths in London he concluded that the disease was spread through a contaminated water pump handle. He also did some groundbreaking work in anaesthesia, administering ether to Queen Victoria during the births of her eighth and ninth children. This in turn led to the more widespread use of anaesthetic during childbirth.

For their discovery of Penicillin in 1928, Alexander Fleming and his associates Sir Howard Florey and Ernst Chain were finally awarded the Nobel Prize in 1945. Today you can visit their reconstructed laboratory at St. Mary’s Hospital in London and learn how they revolutionised medicine with this lifesaving drug, at the Alexander Fleming Laboratory Museum (http://www.medicalmuseums.org/museums/alex.htm). You can watch a video about Fleming’s life and times, and admire the displays in the very lab that he used.

Another revered British Nobel prize winner, Francis Crick (1916-2004) was, along with associates James Watson and Maurice Wilkins, awarded the coveted prize in 1962 for their joint discovery of the double helix molecular structure of nucleic acids (DNA) and their molecular transfer in living material. Crick was also highly respected for reinventing his fields of specialty from working on the design of magnetic and acoustic mines in World War II, then X-ray crystallography, DNA research, and later neuroscience.

Space does not permit me to elaborate further on these great minds, nor any of the dozens of other Britons who have made great contributions to medicine. Needless to say, their discoveries have saved countless lives, and made the world a better place for us all.