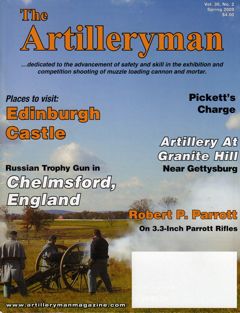 Scotland’s military tradition is ancient and powerful, an inherent part of its national culture. It goes back centuries to the Scottish clans who preferred to settle their affairs, or defend their country by honest battle if all else failed.

Scottish Regiments, walking steadily into the smoke of battle accompanied by the stirring wail of bagpipes and deep rattle of the snare drums must have looked and sounded fearsome to the enemy. Who cannot be moved by such scenes in war movies like Waterloo and The Longest Day?

There’s nowhere better for you to get a taste of Scotland’s proud military history than Edinburgh Castle. Military historians and artillery aficionados will have a feast in this blackened and weathered stone fortress—five gun batteries, and three military museums (including the National War Museum of Scotland). Nirvana!

Over a million people visit this towering black and gray stone castle each year to see its many interesting features and learn about its fascinating history. Dating back as early as the 9th Century B.C., the current castle’s structures were built in the 16th Century, with the exception of St Margaret’s Chapel, constructed in the 12th Century.

Over a dozen other historical sights keep your attention for hours as you wander around the uneven cobblestone courtyards and irregularly laid thick stone ramparts of Edinburgh Castle. You’ll see the Scottish War Memorial, David’s Tower, Half Moon Battery, Crown Square, Governor’s House, New Barracks, the King’s Lodging, the Great Hall, the Royal Palace Crown Room, St. Margaret’s Chapel, the behemoth Mons Meg gun, and the 18th and 19th century Prisons of War exhibit, not to mention the superb views of Edinburgh from the castle ramparts. History is physically tangible here.

Edinburgh Castle still has a military garrison, used for ceremonial purposes and is the headquarters of the Royal Scots Dragoon Guards, The Royal Regiment of Scotland, and the 5th Regiment Royal Military Police. For the artillery fan there are no less than five gun batteries to keep your attention.

The first battery you’ll come to in Edinburgh Castle is as you walk up some stone stairs to emerge on a courtyard called the Middle Ward is named in honor of the Duke of Argyll. Rebuilt in the 1730s, its six guns, plus the adjacent Mill’s Mount Battery, formed the main artillery defense on the north side of castle. The battery was designed by major General Wade, well known in Scotland as the designer of a network of military roads and bridges

The barrels of these black painted cast iron guns point ominously out through embrasures over superb views of Edinburgh. These 18-pounder muzzle-loaders are from the Napoleonic era and built in 1810. If you look on the top of each barrel you can see the royal cipher GR3 (for George III).

Just past the Argyle Battery stands the one o’clock gun, a 105 mm light gun that fires every day at exactly one p.m. causing everyone for miles around to jump. This tradition originated in 1853 when sea captains moored in the nearby port complained that people in Edinburgh had no idea of the time.

Continuing up some stone stairs behind you is the Forewall Battery, a long straight continuation to the left of Half Moon battery, as you face out over the ramparts. These batteries defended the eastern end of the castle. Rebuilt in 1544 on the approximate line of the old medieval defenses, they were heightened in 1573.

Reconstructed again in the 17th century, the Forewall battery is now armed with six iron guns made in 1810 during the Napoleonic Wars. The views through the covered embrasures offer excellent views of some of Edinburgh’s most historic buildings.

The Half Moon Battery

Immediately to the right of the Forewall Battery is a curved half-moon shaped section of the Edinburgh Castle walls. This distinctive semi circular wall is very noticeable from the castle’s eastern exterior. Built on the orders of the Regent Morton after the Lang Siege of 1571-73, the Half Moon Battery was an impressive part of the castle’s defenses.

Sited on the Edinburgh Castle principal line of defense until the 17th century, its curved bulwark gave the cannons a wide angle of fire from behind its tall, insurmountable sloping walls. The guns lined up perfectly here today are the ubiquitious 18-pounders built in 1810. The view up Princes Street is inspiring—surely one of Europe’s finest streets.

Across the other side of the Crown Square courtyard behind the Queen Anne Building in the upper castle is Dury’s Battery. Its name was taken from the Captain Theodore Dury who rebuilt the castle’s south walls in the early 18th century. Nearby is the military prison that held recalcitrant prisoners from Scottish units and French and American prisoners. They used the Dury’s battery area as an exercise yard.

There’s a good recreation of prison life in the 1780’s here, complete with hammocks, prison clothes, animated shadows moving across the darkly lit rooms, even puddles on the floor. Look for the graffiti carved in the wooden doors and walls. Now for the three war museums.

The National War Museum of Scotland

Opened in 1933, this museum pays tribute to the three branches of the Scottish armed forces: the Army, Royal navy and Royal Air Force. Standing in a building dating from 1708, this is the epicenter of Scottish military history, covering 400 years of warfare from early historical battles to the Falklands War. It will take you over an hour to do justice to this exciting museum.

Six themed galleries are crammed with displays of over 2,000 artifacts including an unimaginable array of military equipment, from photographs to weapons, uniforms, personal equipment, personal stories of the Scots at war and on the home front, medals, etc. My favorite items are the bagpipes, kilt, and beret and army knife used by 21-year old piper Bill Millin on D-Day. As one of Lord Lovatt’s commandos, he marched along Sword Beach to encourage his fellow soldiers. Most of them told him to get away as he seemed to be drawing the unwelcome attention of German marksmen.

I was fortunate enough to meet this gentleman in 2004 at Pegasus Bridge, during the 60th Commemorations of the D-Day Landings in Normandy. Now in his 80’s, he was standing, kitted out in kilt and bagpipes, in a gravel parking lot surrounded by a score of curious tourists. Someone recognized him and said, “Play us a tune then Bill”, and that was all it took. Firing up his pipes to full force, he played a magnificent series of tunes.

This unit’s ancestors are traced back to the Royal Scots Greys, the oldest Cavalry Line in the British Army. Their large glass enclosed medals display is testament to their bravery in action. You’ll know you’re at this museum when you see the Scorpion Tank parked outside it.

Their history includes almost every major war the British took part in: the Jacobite Rebellion, Battle of Blenheim, the Napoleonic Wars including Spain and Waterloo, the Crimean War, Balaclava, World War One and World War Two. The artifacts on display reflect these campaigns including captured battle standards from Waterloo.

Look for the diorama of a Scots Grey bayoneting a fallen enemy, and another of a soldier rescuing his wounded and bloodstained comrade in the midst of battle. This museum will take up to an hour if you want to take all the artifacts in.

This historic unit was formed in 1633 under warrant from Charles I, making it the first and senior regiment of the line. Like their Royal Scots Dragoon cousins, these boys have fought in almost every campaign. Displays include silver, medals, uniforms, paintings, personal stories, photographs, weapons and much more. Plan on up to an hour here too.

Continuing up the hill into the large Crown Square courtyard you’ll see the Scottish National Memorial--built in 1927 to commemorate Scotsmen and those serving with Scottish Regiments who had died in the war and subsequent conflicts.

The Hall of Honour is a long somber hallway with twelve stone columns supporting a barrel-vaulted roof. Twelve bays contain a Regimental Roll of Honour, a list of all servicemen and women who died serving their country, including 150,000 in World War One and 50,000 in World War Two. I learn that one in five Scotsmen who marched off to battle never returned—a bleak statistic that brings home the huge contribution the Scots made to so many wars in far off lands.

Some of the finest Scottish craftsmen and women worked on the stained glass, wrought steel, and stone and marble sculptures. Outside the memorial, some evocative sculptures depict Courage, Peace, Justice, and Mercy. The stained glass windows inside are superb. Look for a stained glass window high up in the Shrine of the horseman from revelations, 19, 15, with a swastika on his cloak. There’s some grim irony here—the swastika was an ancient symbol of good fortune. Soon after the window was finished, Hitler’s warplanes appeared over Europe with the same symbol on their wings.

I’ve been in several war memorials around the world, and this is one of the most powerful monuments I’ve ever seen. You’ll need to be silent while walking through this magnificent memorial, and no photography is permitted.

Exploring Edinburgh Castle is a splendid way to spend a day--your mind will be reeling from the variety of sights you’ve seen, and for days after these places will pop into your head. Make sure you see the Honours of Scotland and the Stone of Destiny. These symbols of Scottish sovereignty are on display in the crown room on the first floor of the palace.

The Honours are Scotland’s crown jewels, kept there since 1617. The Stone of Destiny, taken by the British during one of its many conflicts with those Scottish ruffians north of the border, was only returned to Scotland from Westminster Abbey in 1996, amid great ceremony. There are other sundry cannon lying around for you to trip over. Look for the King Charles II cannon in the great hall, and a mortar or two.

And there’s Mons Meg, the behemoth medieval siege gun built in 1449. This has been covered in previous issues of The Artilleryman, so I’ll just add that this muscular six ton bombard was made in Mons, Belgium in 1449, then sent as a present to Queen Mary of Scotland in 1457, for those of you who have recently subscribed to the magazine.

Spend another day or two exploring Edinburgh, a truly unique and special city, with the skirl of bagpipes wafting around every corner. If you’re lucky you’ll meet a strapping Scottish WWII veteran complete with uniform, kilt, medals, and undecipherable Scottish brogue walking around the streets, who’ll happily pose with you for photographs.

If you time your trip to Edinburgh right (note: well in advance) you can see the Edinburgh Military Tattoo, a world famous military pageant held at Edinburgh Castle - an event the whole family will never forget.