Cross Country Running:
Learning to Race Like a Team
By Roy Stevenson 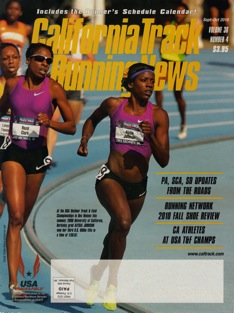 Although cross country racing tactics vary tremendously from coach to coach there are several basic cross country racing strategies. The simplest tactic involves having the whole team run in a pack, encouraging each other throughout the race. This can be a highly effective tactic, especially when the whole team is similar in ability, and is team running in its purest form. Having a fellow teammate encourage you throughout the race is an excellent motivator. Another variation of this racing tactic is to have the team’s fastest runners race at or near the front, while the rest of the team run in smaller groups of 2-3, or even pairs, of equal ability. If you find yourself in a situation where your team has split up, picking out an opponent of about your ability and racing him is also a great motivator for you to maintain your pace throughout the race.

You should also shelter behind other runners when possible, and have them break the wind for you. This conserves your energy in the middle and later stages of the race and is especially effective in races into strong headwinds—research has shown that running into a 10 mph headwind adds 8% to your energy costs, but drafting behind other runners reduces wind resistance by 90%. If the wind is behind you, come out wide from the pack and pick up your pace.

If you are tailing someone be prepared at any time to burst past him when you see him flagging. Passing quickly has a demoralizing effect on other runners, especially if several of your team does this. Nate Jenkins, a Saucony team runner, who competed in the World Championships Marathon in Berlin in 2009 says, “Cross country tends to go out hard and force you to hurt early; it makes you compete and to move without concern for how much longer you have to go”. His advice for racing tactics is “Each race is different. In general you want to run an even pace and move up through runners that have gone out too fast. But really be prepared for many contingencies; be aggressive in the middle of a race when people are struggling. A small move in the middle mile of a race can be crushing to your opponents”.

Hills are another place where a race can be broken up and used to your advantage. How should they be tackled? Molly Huddle, professional Saucony team runner who ran for the U.S.A. in the 2009 World Cross country Championships says, “Hills feel a lot better if they've been practiced, so go work those glutes on some hill repeats! Also-I like to push the downhills, it can catch the other guy off guard.”

Magdalena Boulet, professional Saucony team runner who also ran in last year’s World Cross Country Championship, advises runners to, “Drive the arms; keep the eyes fixed on the top of the hill. Hills are a great place to “break” a competitor as well, especially if you’ve trained for them. Don’t forget to run hard on the downhill, too, because being aggressive when gravity is helping you can put even more distance between you and the competition.”

It is essential that you have something in reserve for the final mile. One of the biggest mistakes a runner makes in cross country racing is starting too fast, getting into oxygen debt and having to carry a nasty lactate accumulation for the rest of the race. Once this happens, the best you can do is simply hang on to the finish any way you can—hardly a sound racing strategy!

Whatever your team strategy, always remember the power that a few words of encouragement to your teammates carry, in the middle of the race. It can make the difference between your team placing or winning. Finally I leave you with a slogan that I saw on the back of a cross country runner’s T-shirt recently: “If you can read this then I’m not last”.

You can find more running information at my running website: www.running-training-tips.com.