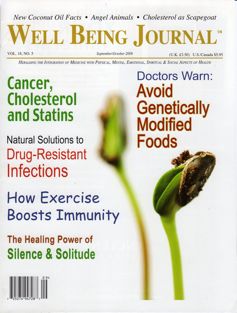 What do we really know about the health benefits of exercise? Can it really improve our health? Does being fit mean your immune system is more resistant to colds and flu infections? Is it safe to work out with a cold? And if all this is true, how much and what kind of exercise does it take to get these benefits?

Everyone wants to live a healthy, high quality life, especially the aging baby boomers, and their generation X offspring. One only has to scan the bewildering array of health and fitness magazines on the racks to see evidence of the increased importance we put on healthy living.

Physicians have made many claims about the positive benefits of exercise on our health, touting fitness as the ideal way to achieve this. Yet most people blindly follow their exercise routines without knowing whether their workouts help improve their health, and without knowing if they are doing the right things. In many cases according to the research, fitness buffs may actually be suppressing their immune system by working out too strenuously.

The rapidly growing body of research into the relationship between health and fitness, over 600 papers, show very positive and promising results. Exercise has some amazing benefits to the body in terms of resistance to infection and certain cancers, and may possibly even improve our life span.

The most exciting finding in the field of exercise immunology is that positive immune changes take place during moderate exercise. People who exercise at a moderate level experience fewer days of sickness from the common cold and other Upper Respiratory Tract Infections (URTI). And less competitive athletes and people following lower key exercise regimens have enhanced immune reactions to infection.

One study found that women who walked briskly for 35-45 minutes, 5 days a week, for 15 weeks, experienced half the incidence of colds as the sedentary control group. A Runner’s World survey showed that 61% of recreational runners reported fewer colds since taking up running, and only 4% had experienced more colds.

Another study conducted by the Fred Hutchinson Cancer Research Center in Seattle found that moderate intensity exercise reduced the incidence of colds among 115 overweight, obese, previously sedentary, post-menopausal women. Their exercise regime consisted of moderate-intensity exercise for 5 days per week, for 12 months.

A recent study from Hong Kong also found that exercising at low to moderate frequency causes lower influenza associated mortality. People who exercised at moderate frequencies from once/month to 3 times/week had lower death rates compared with people who never exercise or seldom exercise.

Benefits of Exercise at Moderate Levels

How does exercising at a moderate level improve our immune system?

Light or moderate exercise boosts our body’s natural immune system by circulating protective cells through the body faster, to attack and eliminate bacteria, viruses and fungi. Infection fighters, such as Natural Killer Cells, macrophages, immunoglobins, white blood cells, and other antibodies, are produced in the bone marrow, lungs, and spleen, and have a clean up effect on foreign invaders.

Another theory holds that the increase in body temperature when we exercise may inhibit the growth of bacteria, thus reducing its foothold in the body. Some exercise scientists believe that regular exercise helps rid the lungs of airborne bacteria and viruses that cause URTI, while others believe exercise causes the loss of carcinogens through increased sweat and urine loss.

Interestingly, active people also experience lower rates of colon cancer and breast cancer. Researchers believe that moderate exercise boosts the body’s immune system, attacking malignancies that have viral origin. In addition, the faster passage of food through people who exercise reduces the time carcinogens are in the digestive tract. And fit people are less likely to be overweight and have lower body fat, which can cause cancers.

Over Exercising - the Downside

Benefits of Exercise - is there a downside?

However exercise is a two-edged sword. Over exercising can suppress normal immune function, so getting the right balance of frequency, intensity and duration of fitness workouts is critical. You can go from being vibrantly healthy and energetic to toppling over the abyss by picking up any virus and infections going around, if you overdo things.

Overtrained athletes at all levels have been shown to experience impaired immune systems, to the extent that they suffer from a higher number of upper respiratory tract infections (URTI) than untrained people.

During Olympic Games, athletes experience URTI at abnormally high levels, according to clinicians. In the 1960 Tokyo Olympics, no less than 40% of the athletes were stricken with a nasty flu virus that swept through the games village like the plague—robbing many of medal performances. In the more recent 2000 Sydney Olympics, 33% of the New Zealand team’s visits to medical personnel were attributed to URTI.

URTI is also elevated following competitive endurance races such as marathons and triathlons. One in seven (14%) of marathon runners reported an episode of URTI during the week following the 1987 Los Angeles Marathon, compared with two in 100 (2%) of runners who did not compete.

According to research, there’s an “open window” of altered immunity, lasting from 3 to 72 hours after you exercise hard and for longer than 90 minutes. In this time, infectious microbes, viruses and bacteria may overcome your body’s natural defenses and gain a foothold.

The result of these myriad reactions is a cascade effect that can lead to depressed immune function in the exerciser or athlete who has been overreaching for extended periods of time.

Clearly other factors affect our immune system and health. Our chances of getting sick with a cold depends on other factors too—age, cigarette smoking, alcohol consumption, obesity, allergies, environmental conditions such as high altitude, extreme heat or cold and air pollution, mental stress, other underlying disease, and lack of sleep, to name a few. A study of 852 German athletes found the combined effect of overtraining coupled with mental stress, lack of sleep and weight loss causes a higher level of URTI than just in overtrained athletes.

Interestingly, despite the abundance of pills and potions sold in health food stores, claimed to keep athletes healthy, the only substance shown in research to positively impact the immune system is drinking carbohydrate solutions during and after endurance exercise. Drinking one liter per hour of typical sports drinks has been shown to lower blood cortisol and epinephrine levels, reduce adverse changes in blood immune cells, and lower anti-inflammatory cytokine levels.

It is believed that the sugars in these drinks help maintain blood glucose levels and glycogen levels, thus providing the immune cells with enough energy to function maximally during exercise. However, we all know that refined sugars, sucrose, etc, are responsible for a myriad of health problems including dental caries, and rapid blood sugar swings, so you should choose sports drinks that are low in simple, refined sugars, and higher in complex carbohydrates such as glucose polymers, or corn starch. Fruit juices such as apple juice and grape juice have also been shown to be as beneficial as sports drinks for performance enhancement and thus presumably, immune system enhancement. Fruit juices also have the advantage of adding electrolytes and minerals to your diet.

However, if you train hard but within your limits, your URTI risk is typically unaltered. Thus there is a relationship between how much and how hard you exercise and your chances of getting infection, and Dr Dvid Nieman, one of the foremost researchers in this field has proposed the J-shaped curve theory to explain the interrelationship between exercise and infection. 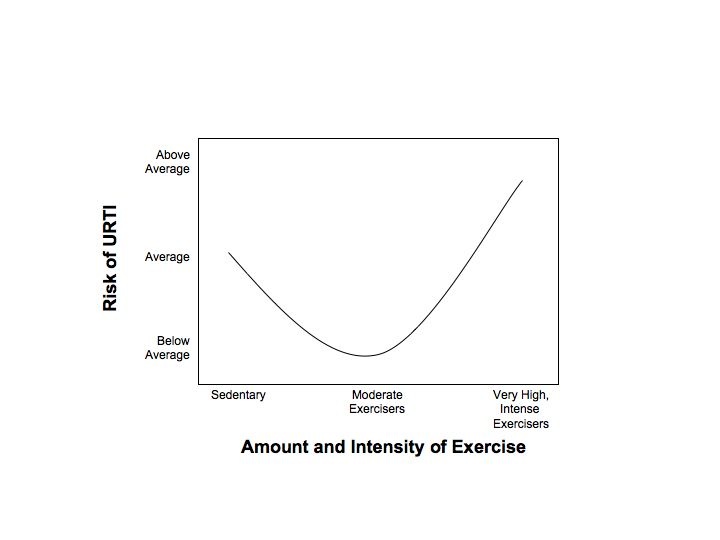 As seen on the chart above, moderate physical activity may decrease the risk for URTI, while strenuous exercise may increase the risk.

What about exercising when you have an upper respiratory tract infection like a head cold, with symptoms like a runny nose and sneezing?

Moderate exercise training during a cold does not appear to prolong or worsen symptoms of the common cold. A study at Ball State University looked at 34 young men and women who were infected with a cold rhinovirus.

No difference was found in symptoms between an exercising group, who ran on treadmills 40 minutes every other day, at a moderate intensity while sick, and a resting group. And it took both groups the same amount of time to recover from their colds.

Some exercise scientists and epidemiologists use the “above the neck” rule, where if mild symptoms in the mouth, nose and throat are present, it’s ok to exercise, although perhaps at a lower intensity and volume.

However, if the infection has spread to the chest causing heavy coughing, excessive production of liquid, if temperature is above normal, and lymph glands on the neck are swollen, exercise is definitely not recommended. Exhaustive exercise during an infection will enhance the severity of the infection and prolong time to recovery. In this situation you’ll need 2-4 weeks to recover

Benefits of Exercise to Boost Your Immune System

Benefits of Exercise - How Much Exercise is enough to Boost Your Immune System?

Moderate aerobic activity of 30 minutes, almost every day seem to gain the most positive benefits of exercise in research.

Nieman believes that brisk walking at about 70% of maximal heart rate, for 40 minutes per day will enhance your immune system to where you have half the chance of contracting URTI as non-exercisers. Certainly doing more than 90 minutes of vigorous activity points to an increase in URTI, so we should stay well below this level.

Elite athletes and hard core exercisers may be better off doing one high intensity workout every 2-3 days, to ensure their body recovers during that 72 hour open window, following heavy workouts when they are more susceptible to infection.

The American College of Sports Medicine has a well-researched position stand on The Recommended Quantity and Quality of Exercise for Cardiorespiratory Fitness in Healthy Adults that meets the requirements for enhancing the immune system quite nicely.

Benefits of Exercise - What can be done to minimize your chances of getting URTI?

* Closely monitor your exercise to avoid overtraining and chronic fatigue.

* Do not overdo high intensity training—runners who train and race at a faster pace have higher incidence of URTI.

* Eat a well balanced diet to keep vitamin and mineral levels in the body at optimal levels.

* Use carbohydrate drinks before, and after endurance events or during very heavy exercise sessions. Recommended dosage is 30 to 60 grams of carbohydrate during exercise. This will lower the impact of the stress hormones on your immune system.

* Get adequate sleep on a regular schedule. Sleep disruption has been linked to lowered immunity.

* Keep your life stressors to a minimum because high stress levels have been linked to URTI.

* Wash your hands with warm soapy water and minimize hand to eye and hand to nose contact, especially during cold and flu season.

* Do not exercise in a group exercise setting if you have URTI, to avoid spreading it to others.

Return from Benefits of Exercise to Fitness and Health

Return from Benefits of Exercise to Home Page